Subject: Huge moths
Location: Southern California Santa Monica area near ocean but no lakes or standing water
April 21, 2017 8:23 pm
I get these every now and then they can get very large. They usually land in or near my one light and expire there. Any idea what they are?
Signature: Paul 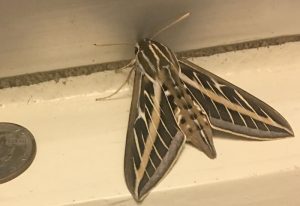 Actually, I ended up digging it up myself. They are apparently some very common species called Sphynx White Stripe Moth or something to that effect. The record I saw says they get big and they are not kidding. You could easily mistake the larger ones for a small bird. Says also they are continent wide in North America but I’ve only ever seen them in Santa Monica. No need to spend your time looking it up but nice service you have.
Paul 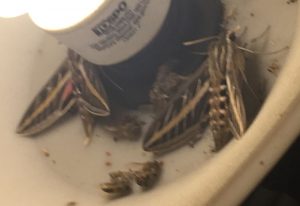 Dear Paul,
We are happy to learn you were able to self-identify your Whitelined Sphinx Moths.  They are currently flying in Southern California.  We had four at our porch light in nearby Mount Washington in Los Angeles early this morning, and one day earlier in the week there were seven.  We suspect the wet winter allowed more plant growth to feed the caterpillars, hence more moths have developed and are currently in flight.