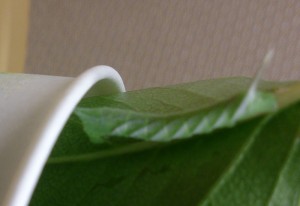 Dear Janet,
Though your caterpillar bears a family resemblance to the Lime Hawkmoth Caterpillar, which we found pictured on Nature Spot, the Lime Hawkmoth is an Old World species not found in Pennsylvania, though we did report one rogue sighting several years ago of an adult Lime Hawkmoth in Pennsylvania.  Though your image is quite blurry, it does show a few interesting diagnostic features, including a protrusion on the head and a strong diagonal stripe leading to the caudal horn, which causes us to speculate that this might be the caterpillar of a Hermit Sphinx, Lintneria eremitus, based on one image of a green individual posted to the Sphingidae of the Americas, but you need to scroll down the page to see it.  Hermit Sphinx caterpillars ” feed on mint family, Lamiaceae: Bee-balm, Monarda, mints, Mentha, sage, Salvia” according to BugGuide.  Can you please confirm the plant upon which it was found?  Here is a BugGuide image that also looks quite similar to your caterpillar.

Thank you for the response. The Hermit Sphinx makes more sense. Sorry the photos are blurry, I don’t have a good camera at work.
I’m not sure what plant it was on as I found it on my pants leg this morning at work.  I think I found an Elm leave but it doesn’t seem to want to feed.  I will have access to mint this evening, so I will see if it likes that.
Thanks again,
Janet