Subject: Larger than a Boxelder
Location: Mound, MN
May 25, 2016 7:00 am
Dear Bugman,
This largeish black bug, with orange and black legs, and a hard black shell, with silvery fur on his belly was trapped between my screen and door last night. I’ve never seen one before. We live in Minnesota and have a garden and 3 dogs. Wondering what it is, and if it’s toxic to pets if eaten by curious and non-discriminating terriers.
Thank you.
Signature: Melanie Bisson 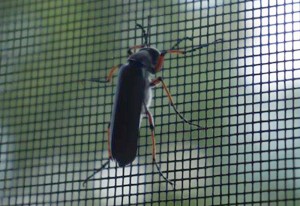 Dear Melanie,
It is difficult for us to be certain because of the odd camera angle, but we believe this is a Blister Beetle in the family Meloidae, possibly Lytta aenea, which is pictured on BugGuide.  Many species of Blister Beetles are able to secrete a compound known as cantharidin that may cause blistering in humans.  We have read reports of livestock being poisoned by ingesting Blister Beetles with hay.  According to Pet MD:  “Blister beetles are a type of insect found primarily in the southwest and Midwest regions of the United States. These beetles harbor a very powerful toxin called cantharidin, but, unlike other types of insects, it does not spread this toxin through biting. Adult blister beetles feed on alfalfa flowers and crops, the same crops used for horse and cattle feed, and when the crops are harvested the beetles are often killed in the process, contaminating the crops with their body parts and fluids and causing illness in the horses that eat the contaminated feed.   Blister beetles are extremely toxic when ingested by horses: as few as five to ten beetles may be fatal to a horse.  The cantharidin toxin affects many bodily systems.  It is extremely irritating to the digestive tract and causes blisters and erosions from the lips and tongue all the way through to the lining of the intestines, which causes abdominal pain (colic) and diarrhea.  This toxin also causes damage to the kidneys and the heart.”