Subject: Spider in Hydrangea
Location: Texas
May 14, 2016 9:06 pm
What kind of spider is this? is it venomous or harmful?
Thanks
Signature: Jacob Chapman 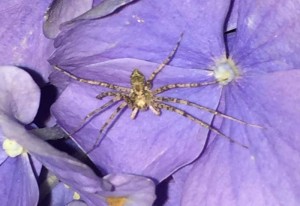 Dear Jacob,
We believe this is a Running Crab Spider in the family Philodromidae, and possibly in the genus Philodromus which is well represented on BugGuide.  According to BugGuide, the family members can be recognized because they:  “tend to have the second pair of legs significantly longer than the first pair, which distinguishes them from the similar Thomisid crab spiders. In addition, thomisids have third and fourth legs that are shorter and more slender than the first two pairs of legs, while philodromid legs are subequal in length.”  While Running Crab Spiders do have venom that they use to incapacitate prey, they are not considered dangerous to humans.  The long first appendages, known as pedipalps, indicate your individual is a male.