Subject:  California Mantis Ootheca hatches in Mount Washington
Location:  Mount Washington, Los Angeles, California
April 5, 2016
Last August, we created a posting for a lost photo opportunity of a California Mantis and a Figeater together on a butterfly bush that we missed when the camera malfunctioned.  A few weeks ago, a branch on the butterfly bush was broken, and when we cut it free from the plant, we noticed three California Mantis oothecae, obviously deposited by the female we observed there.  We tied two of the oothecae to a nearby palo verde and the third to a plum tree in the back yard.  While out in the yard, we inspected the oothecae, and noticed that one appeared to have hatched out its brood.  Luckily we spotted one little Mantis hatchling, a mere 1/4 inch in length, scuttling away. 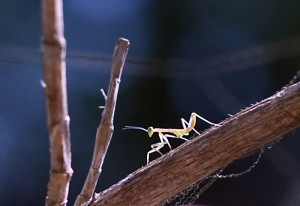 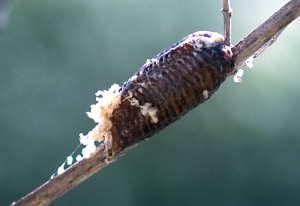 Hatched Ootheca of a California Mantis

Update:  April 11, 2016
We did some gardening yesterday, and though we couldn’t be bothered getting the camera, we did find two additional oothecae on the butterfly bush, and as we were pulling weeds, we found two green 1/4 inch long green mantids scuttling around the low grass.