Subject: Moth
Location: Macon, Ga
March 19, 2016 6:05 am
My friend took this picture last night, March 18, 2016, around 10 pm on her kitchen window in east Macon, GA across the street from Ocmulgee National Monument. I told her I thought that it had recently hatched so not fully extended.
Can you tell what kind of moth this is?
Thanks so much.
Bty it was taken with a Nikon Coolpix P530.
Signature: Barbara Edwards 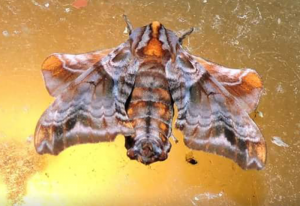 Dear Barbara,
This gorgeous moth is a Small Eyed Sphinx, Paonias myops, and according to the Sphingidae of the Americas site:  “Small-eyed Sphinx females call in the night flying males with an airbourne pheromone emitted from a gland at the posterior of the abdomen.  Both sexes rest with wings parallel to the resting surface, with the upper lobes of the hindwings protruding above the forewings.  The lower abdomen of the male (right) arcs upward toward the head, while the abdomen of the female hangs strait down on a vertical surface.”  This moth being presumably attracted to a light in the window, and the position of the abdomen indicates your individual is a male.

Large Elephant Hawkmoth from the UK