Sent Via Personal Email
Subject:  Moth on Door on Avenue 44
Location:  Mount Washington, Los Angeles, CA
February 9, 2016 8:27 AM
hi, can you tell us the species, please?
and this one, from yesterday?
what happens if the porch light has attracted them and they stay all night…
will they die because they have not flown – or eaten?
c. 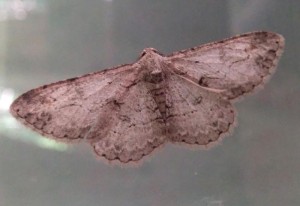 Dear Clare,
We believe both of your moths are in the family Geometridae and there are so many similar looking individuals in the family that we often have difficulty with species identifications.  The one with the elongated wings might be a Pug in the genus Eupithecia based on this BugGuide image.  According to BugGuide:  “Numbers By far the largest moth genus with over 1400 species worldwide. About 160 Eupithecia species are found in America north of Mexico.  62 species in Canada (CBIF). Several species are Holarctic.  Identification Many Eupithecia species require dissection for identification and there are many undescribed species.  Adults at rest often hold their long forewings (with hindwings hidden beneath) at right-angles to the body, giving a distinctive “soaring hawk” appearance.  Food Larvae feed mostly on Asteraceae and also other plant families.”  We would not eliminate that it might be Glaucina erroraria which is pictured on iNaturalist though according to BugGuide:  “Dissection often needed for this group.” 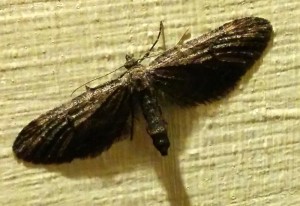 Emerald Moth on the front door

Countdown 19 more posts to the 20,000 Mark:Mourning Cloak in Mount Washington