Subject:  Spider’s Nest??
Location:  Mount Washington, Los Angeles, California
May 7, 2015 11:16 PM
Hello Daniel,
I need your help to identify a scary nest in my garden.  It is dangling from a trailing geranium that hangs from the rear deck.  Perfect ventilation!  At first, I thought it might become a small bird’s nest but it has not evolved for over a week.  I was bitten by a spider three weeks ago, in our bedroom (its was inside of my p j pants!)  As a result, I was on antibiotics and it took over two weeks to heal.
Then a while later, Gerard killed a small spider in the bedroom.  I kept the body and will show it to you when I see you next week.
Anyway, tell me what I am “nurturing” in my geranium!
Have a good night,
Monique 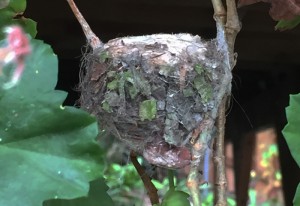 Julian Donahue comments
And the BioSCAN person who picked up our Malaise trap samples last week spotted a similar nest on our cup of gold vine (Solandra maxima) overhanging the driveway–first hummingbird nest I’ve seen on our property. Probably an Allen’s Hummingbird, now our more common species.
Did a little checking and learned some new stuff about this bird: nesting season is October – May or June, and a single female may lay four or five clutches of eggs (two eggs per clutch) in a single season, often using the same nest over again. Like most moms, she does all the work.
These factoids and many others at: http://phoebeallens.com/facts.html
Julian

Subject: Mystery moth
Location: Powell, Ohio
May 7, 2015 2:04 pm
Saw this moth at the kids’ school today. Never seen one before. Assuming it’s male, cause of the fuzzy antennae. Columbus, Ohio area, lots of woods, ponds and streams around.
Signature: Amber 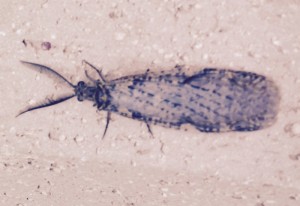 Dear Amber,
Though it has some mothlike qualities, this Spring Fishfly, Chauliodes rastricornis, is not even closely related to a moth, though your speculation that it is a male insect because of the antennae is correct.  According to BugGuide, they are found:  “Near calm bodies of water with detritus.”

Female Dobsonfly or “This Thing Looks Like Flying Death”

Location: Golfito, Costa Rica
May 6, 2015 7:42 am
Found this rustling in our bathroom last night. It was about 4-5 inches long. It didn’t move fast. We live in Golfito, Costa Rica. We do get our fair share of regular ol’ cockroaches but have never seen one like this. I posted this on FaceBook and people have identified as a Giant Cockroach – yes, it was.
Any other thoughts?
Thank you.
Signature: Golfito 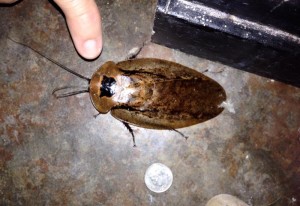 Dear Golfito,
We found a matching image on Junglewalk called a Costa Rica Wood Cockroach, but no scientific name.  Same scenario with an image on PBase.  We found it identified as Archimandrita tessellata on Travel Images.  It is called a Peppered Roach or Giant Cockroach on UniProt.

Thank you WTB. I had sent another request for identification months ago. I never received a response. I realize you receive many requests, therefore, I thank you for this one.
I will share it with the other Golfito bug loves.

Subject: Red / Black beetle? On car tire
Location: Marion IL
May 7, 2015 1:29 am
Found this on my tire about an hour after parking in Marion, IL…. Would really like more info on it.
Signature: J brewer 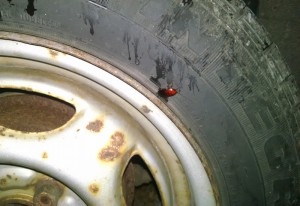 Dear J brewer,
We imagine these images of an immature Cockroach hitching a ride on a car might incite some paranoia. 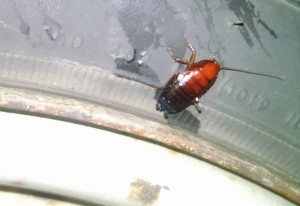 Subject: Fishfly maybe?
Location: Central PA
May 7, 2015 6:11 am
Found several of these guys at our cottage on the river over the weekend. We haven’t noticed them there before. They look a bit like fishflies, but all had a red band around the neck. Is this a trait that fishflies can have, or a different insect all together?
Signature: Kayla 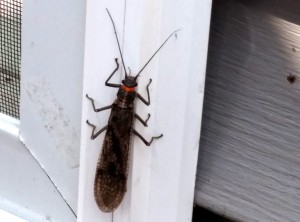 Dear Kayla,
Your insect is a Giant Stonefly in the genus Pteronarcys, and according to BugGuide they are also called Salmonflies.  Just for fun, here is a link to one of our favorite Giant Stonefly postings. 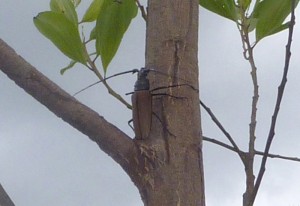 Dear ecotrancoso,
You are correct that this is a beetle, and it is in the family Cerambycidae, the Longhorned Borer Beetles.  We are also quite confident that it is in the subfamily Prioninae, and according to BugGuide:  “world’s largest beetles are members of this subfamily.”