Subject: Unidentified turquoise bellied (probably) Plant Hopper from Bali, Indonesia
Location: Bali, Indonesia
January 16, 2015 10:44 pm
Dear Bugman,
I found that alien looking creature in my garden.
I am very confused about its identification, it’s head reminds me of mantids, but its movement and fluffy ‘butt’ reminds me of pant hoppers. I thought it could be a sort of moth, given that it apparently sports a galea, but then it has what appears to be a shell. I then thought it would be a kind of coleopteran, but then I was being silly.
It is also rather special in more than one way:
*It moves sideways and backward more often than forward
* It has two wings and two elytras but doesn’t appear to like flying
* It jumps short distances when feeling under pressure
* Sometimes emits a sort of white powder when jumping, probably as a defense mechanism, powder doesn’t seem to have any effect on me, maybe mildly irritating for the skin?
* Its abdomen ends in a sort of furry tuft of hair (thus my guess toward a hopper)
* It seems to have some kind of galea, and no visible mandibles.
* COLORS!
Thanks by advance for your help!
Signature: Danny Hefer 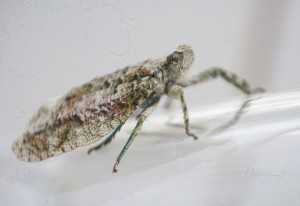 Dear Danny,
We agree that this is a Planthopper, and we are posting your submission prior to attempting a more conclusive identification. 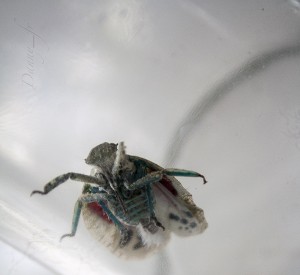 Identification Courtesy of Karl
Hi Daniel and Danny:
I believe this is a Eurybrachyid planthopper (Eurybrachyidae = Eurybrachidae). This is a small and obscure family with representative species in Asia, Australia and Africa. In Australia they are commonly referred to as Gum Hoppers or Wattle Hoppers. There is very little information to be found about Eurybrachyids in Indonesia, but based on photos of specimens from other parts of Southeast Asia I would say it is likely a variety of Thessitus sp.  The genus has been reported from Thailand, Borneo and eastern Indonesia, so it seems reasonable that there are representatives on Bali as well. Danny’s comment that he thought it might be a beetle is interesting because some Eurybrachyid Planthoppers do look very much like beetles; so much so that they are sometimes referred to as Beetle Planthoppers. Check out these guys from Cambodia with their perfect false antennae and faces on their backsides. This is an example of automimcry, a type of mimicry where one part of an organism has evolved to resemble another part for the purpose of deception. Walking sideways or backwards is apparently a common behavior among Eurybrachyids, and is probably intended to deceive and confuse predators as well. In the case of some species, Ancyra spp. for example, both forms of deception are employed with impressive results. Regards. Karl 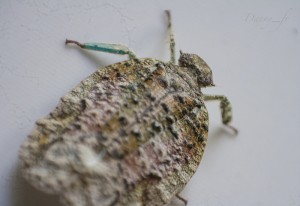