Ichneumon from Australia The Thing That Drives the Chief from His Chair: Chichotsa Mfumu from Malawi

Subject: Unknown Very Small Bee Species
Location: Lamar county, South Mississippi
December 25, 2014 6:14 pm
http://www.liveleak.com/view?i=f95_1347056701
Above is a link to a video I posted of an unidentified bee species I found in my back yard one day. I realize the video isn’t the best quality but it’s all I have. They were so small once I left the area I couldn’t find them again to obtain a specimen. I can tell you my finger seen in the video is 2 cm wide, exactly, if you can use that for size reference.
If you pause it near the end you can get a decent profile of it and it’s characteristics. They lived in a small hole which was guarded by the abdomen of a colony member. They appeared to be gatherers but were so fast I couldn’t see what they were bringing back. My first impression was that I was looking at a queen fire ants (Solenopsis invicta) ready to swarm as the bees had amber, shiny bodies just like fire ants. But their flight characteristics said bee to me. They weren’t aggressive when I probed the opening with a small piece of grass, they just removed it and continued to keep the entrance sealed with an abdomen.
I have passed this video around to a few local entomologists and they keep telling me bees don’t get that small and they can’t tell without a specimen. All the research I have done has produced similar looking insects like Sphecodes but I can’t find any that fit into this size range.
…
Thank you.
Signature: Steven Cimbora 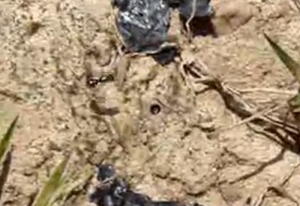 Dear Steven,
Your video shows what appears to be a Mining Bee in the family Andrenidae.  According to BugGuide:  “Many small, ground-nesting bees observed in areas of sandy soil are members of the family, Andrenidae. Characteristics of this family (of which there are approximately 3000 species) are: Small size, 20 mm, (or smaller) brown to black in color, and nesting in a burrow in areas of sparse vegetation, old meadows, dry road beds, sandy paths. Although the nests are built in close proximity of one another, the bees are solitary (each female capable of constructing a nest and reproducing). Many species are active in March and April when they collect pollen and nectar from early spring blooming flowers. The female bee digs a hole 2-3 inches deep excavating the soil and leaving a pile on the surface. She then digs a side tunnel that ends in a chamber (there are about 8 chambers per burrow). Each chamber is then filled with a small ball of pollen and nectar. An egg is laid on the top of each pollen ball and the female seals each brood chamber. The emerging larval bees feed on the pollen/nectar ball until they pupate.”  We are shocked that your local entomologists have no knowledge of these native, small, ground-nesting Mining Bees. 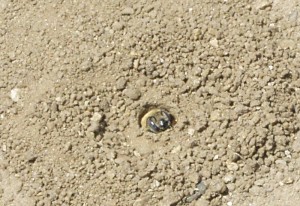 Head of a Mining Bee preparing to exit (from our archives)

Thank you for the quick response.
I just wanted to point a few things out that run contrary to the Mining Bee’s description based on my personal observations of them.
I observed fellow nest members guarding the entrance with their abdomen, as seen in the video.
The nest entrance is perfectly clean of any mounding or tunnel waste and I observed more than one bee leave and return to the entrance. A few times there were several hovering near it waiting to enter.
The size range of 20 mm or smaller is starting out at the width of my finger, seen in the video which is 20mm or 2 cm wide. I would estimate their size at about 5 mm at best and that was the bigger ones.
As you watch the very beginning of the video, right before I put my finger in frame, you will see one depart then another come to the entrance and block it with it’s abdomen. This is not a solitary bee as the mining bees are described as being. They also appeared to lack the pollen brush associated with Mining bees.
Thank you for the effort and if I can ever find them again I will definitely get a specimen.
Steven Cimbora

Thanks for getting back to us Steven.  We have tagged the posting as Unidentified and we have included a screen shot from the end of your video.  Perhaps one of our readers has an idea what Hymenopteran this might be.

Update:  January 4, 2015
Mr. Marlos,
I am providing a new link to some more footage of the unknown bees I found in my back yard. There is much more footage of their activity and it is stabilized. It also shows the presence of more than one bee occupying the nest at a time (Entrance guard) and better footage of their flight characteristics.
I went ahead and scaled some screen shots to try and get a better measurement of them and I came up with approximately 3.2 mm in length. I did this by scaling a screen shot of my finger until it measured the same as actual, using Gimp2 software to measure with. I then took a screenshot of the bee in flight and scaled it to the same dimensions and then measured it. The opening measured approximately 1.1 mm.
You might also find better images to capture and post in this footage as well.
Thank you for your time.
Steven Cimbora
https://www.youtube.com/watch?v=KdMJJITjT-Y&feature=youtu.be