Subject: Giant lovely emerald katydid?
Location: Noumea, New Caledonia
December 23, 2014 6:50 am
Hi guys! I found this katydid(?) in a parking lot in New Caledonia in ~February 2013. It had been flattened by cars but was still impressively large and green. Friends there called it a coconut cricket. Any idea what it is?
Thanks!
Signature: Lela 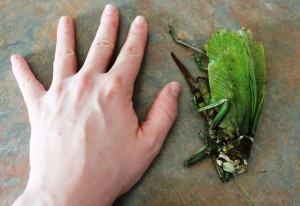 Dear Lela,
In 2010, we posted what appears to be the same species of Katydid from New Caledonia, and that individual was also dead, killed by a Gecko.  At that time, Katydid expert Piotr Naskrecki identified it as a large endemic species, Pseudophyllanax imperialis, commonly called a Coconut Grasshopper.  You may read more (in French) about Pseudophyllanax imperialis on the Endemia.NC website.

Hi Daniel, thank you so very much for the response. I had seen that individual on your site but didn’t think it was the same thing – clearly my bug ID skills need work 😉 Thanks again and have a lovely holiday!
Lela