From the monthly archives: "October 2014"

Subject: What is it?
Location: Berwyn, Illinois
October 6, 2014 12:49 pm
Hi! This fellow was sitting on a leaf in suburban Chicago today.
Signature: Debbie Mercer 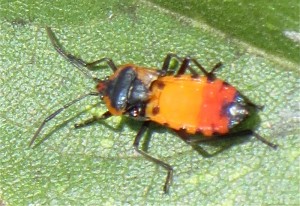 Dear Debbie,
This looks to us like a Large Milkweed Bug, but for some reason, its beautiful, aposomatic wings have been ripped off.  We cannot imagine what could have done this.  It does not seem like a natural accident, nor does it seem like predation thwarted. 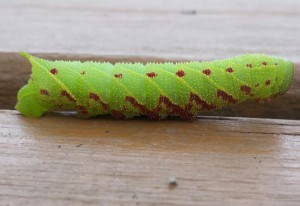 Dear Kimberly,
In our opinion, this is the Caterpillar of a Blinded Sphinx, Paonias excaecata, and you can compare your image to this image on BugGuide.

Subject: psychidae oiketicus
Location: Guatemala city
October 4, 2014 1:21 pm
After a large amount of picture comparisons and forum searching, I think I have this one pegged as a basket bug. I sent an identification request this morning still thinking it was hornetsnest of some kind.
Signature: ithinki’ve got it 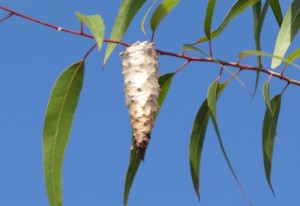 We agree with your identification.  Moths in the family Psychidae are commonly called Bagworms because the larva construct “bags” from silk and plant parts that they live inside as a means of protection. 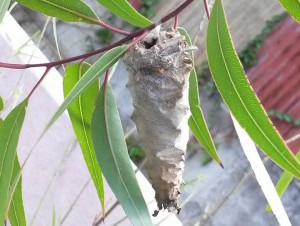 Subject: Cigar Caterpillar
Location: Austria, 47°11’00.76″ N 15°29’22.96″ E
October 4, 2014 10:27 pm
Greetings from Austria!
I found this caterpillar on Sunday, September28 near Graz, Austria. The temperature was in the 60s and it seemed to be lumbering along the street, perhaps looking for a place to wrap itself up for the winter. The area is mountainous (ca. 2300 ft) with mixed deciduous and coniferous trees. The caterpillar was about four inches long, and I wondered if the spots at the head would be translated into the moth (?) it would become.
Thanks for being bug liaisons!
Signature: N. Fritz 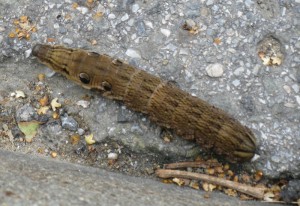 Dear N. Fritz,
This interesting caterpillar is an Elephant Hawkmoth Caterpillar, Deilephila elpenor, and according to the UK Moth site:  “The English name of this moth is derived from the caterpillar’s fanciful resemblance to an elephant’s trunk.   The adults are attractively coloured pink and green affairs, with a streamlined appearance. They fly from May to July, visiting flowers such as honeysuckle (Lonicera) for nectar.  The larvae feed mainly on rosebay willowherb (Epilobium angustifolium), but also other plants as well, including bedstraw (Galium).”  According to Made By Mother Eagle:  “When startled, the caterpillar draws its trunk into its foremost body segment. This posture resembles a snake with a large head and four large eye-like patches. Caterpillars are preyed upon by birds, but these shy away (at least for some time) from caterpillars in “snake” pose. It is not known whether the birds take the caterpillar to actually resemble a snake, or are frightened by the sudden change of a familiar prey item into an unusual and boldly-patterned shape.”

Subject: Another example of Tachinid Fly with Fungus Infection??
Location: Birmingham, United Kingdom
October 6, 2014 3:21 am
Hi all,
I think this is another example (found 6th October 2014) of a Tachinid Fly with the pathogenic fungus Enthomphthora Muscae, it just looks as if it flew straight into my back door and died on impact. Possibly the same as on your web page:  2009/12/25/tachinid-fly-we-believe/
Can you please confirm that it is a Tachinid Fly? As I don’t believe there are any ‘natural’ black and white stripped fly’s here in the UK that look like this one.
Kind regards
Signature: Milly – Birmingham (UK) 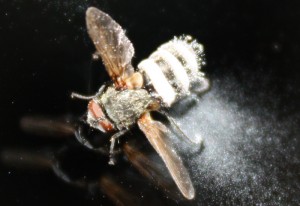 Hi Millie,
We agree with both your identification and your diagnosis.  As Karl indicated in the link you provided:  “There are numerous photos on the internet that look very similar to this this. The white banding occurs as the fungus bursts out between the abdominal segments (presumably just before the victim expires).”

Tachinid Fly emergence and possible Fungus from the UK

Subject: Bug Love – Flies from Italy
Location: Italy (Lazio)
October 6, 2014 3:59 am
Hey Bugman,
These two flies were flying around one on top of the other, and they eventually landed on a plant.
I am not particularly curious of the species. I just wanted to send you this for the Bug Love section.
Ciao, Saverio
Signature: Saverio 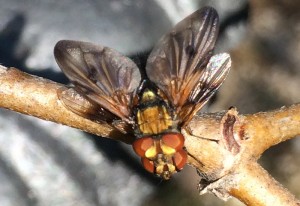 Dear Saverio,
Our hunch was that these were mating Tachinid Flies, and upon doing some research, we found we are correct.  We initially identified them as Ectophasia crassipennis on the Insects of France website where we learned:  “This fly lives in southern Europe and in the warm parts of Central Europe. Not in the Netherlands like some other members of the subfamily. … Males and females are different. The brownish yellow abdomen of the male has a wide black stripe.  The female lays the eggs directly into the host  the shield bug (Pentatomidae)  Length 5 – 9 mm. May – September.”  We verified the identification on another French site.