Subject: caterpillar
Location: Northwest Houston, TX
October 24, 2014 5:51 am
I found this in a parking lot in Houston, TX. I’ve lived here all my life and have never seen anything like it. It looks like some of the Sphinx Moth caterpillars I’ve seen in Google Image Search, but it doesn’t quite match any of them. Could you help me identify it?
Signature: Jeremy 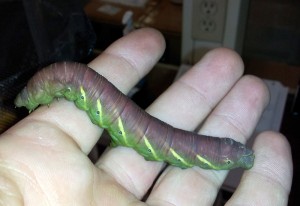 Hornworm may be Banded Sphinx

Hi Jeremy,
We agree that this is a Hornworm in the family Sphingidae, even though it appears to be lacking a horn.  Our first impulse was that this resembles a pre-pupal Waved Sphinx Caterpillar, but the lack of a horn and the orientation of the light slashes behind the spiracles and running from front to back in orientation would eliminate that as a correct identification.  A prepupal Modest Sphinx Caterpillar pictured on Sphingidae of the Americas also has the white slash marks oriented the opposite direction.  As we must leave for work now, we are going to write to Bill Oehlke to get his assistance.  We wonder if it might be an unusually colored Ficus Sphinx, Pachylia ficus.  We were unable to locate its identity on the Sphingidae of the Americas Texas page.

Wow, thanks!  I honestly didn’t expect such a quick response. You guys rock! Let me know what Bill thinks.