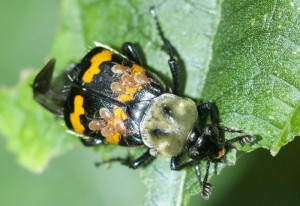 Dear Katy,
Thank you for your excellent images.  The “hairy” thorax indicates that this Burying Beetle is a Tomentose Burying Beetle, Nicrophorus tomentosus, and according to BugGuide:  “dense yellow hair on pronotum distinctive.”  We generally identify the mites as Phoretic Mites, meaning that they use the beetle for transportation purposes, so thank you for supplying a genus name.  According to BugGuide:  “Species in this genus inhabit vertebrate carrion and ride on silphid beetles. They don’t show host specificity, but mix up in larger carcasses where adult beetles come to feed. Those on Nicrophorus ride back on the adult and enter the brood cell and reproduce there. “ 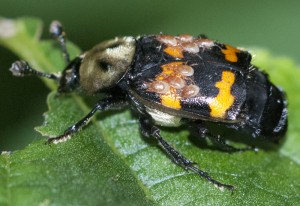