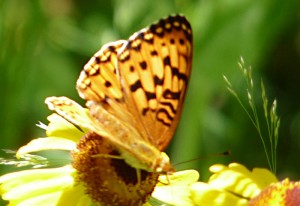 Hi Clare,
This is a Greater Fritillary in the genus Speyeria, and the Greater Fritillaries are larger than the Checkerspots.  Greater Fritillaries also have silver spots on the ventral surface of the underwings, which one of your images nicely illustrates.  See BugGuide for images of the many North American Greater Fritillaries, which we have a very difficult time distinguishing from one another.  According to BugGuide:  “This distinctive genus is unlikely to be confused with any other in North America. These are medium to large sized, broad-winged butterflies (most are over 2 inches in wing span, all at least nearly this large, and many species are much larger). Most have a distinctive pattern of black dashes and spots above and with rounded or oval (usually silvered) pale spots below, particularly on the hind wing. There are a few species which diverge from the usual orange ground color, and several in which light spots below may be unsilvered. In S. dianathe pattern and coloring are highly modified, but this species is so very distinctive as to be recognizable at a glance. … Checkerspots can be confused with Fritillaries too (and are also called ‘Fritillaries’ by the British), but they are also much smaller than Speyeria, and the pattern below is always distinctly different (see photos under tribe Melitaeini). The upper side does not have a row of rounded spots near the outer edge of both the front and hind wings as do the ‘true’ Fritillaries.”  Two species found in Southern California according to the Butterflies Through Binoculars The West by Jeffrey Glassberg are the Coronis Fritillary, Speyeria coronis [See BugGuide] and the Callippe Fritillary, Speyeria callippe [see BugGuide]. 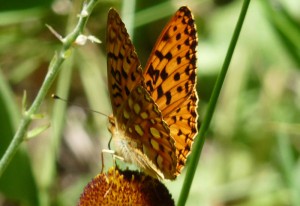 thanks, daniel. i did look online – but wanted to know:
so, it could be the coronis or calliope? would this apply to the west side of the sierra nevada, too? (kings canyon nat’l park).
c.

Based on the range maps in Butterflies Through Binoculars The West, those are the two possible Fritillaries in Southern California.  Sadly, BugGuide does not have true range maps, and sightings cause the entire state to be colored, as in the case of S. coronis and S. calliope.  Other California species are found in Northern California.  According to BugGuide information for all species in the genus:  “Caterpillar food plants are Violets, Viola species.”  Violet are relatively common in the eastern portion of the country, hence the greater Fritillary diversity there.  How many native violets are found in Southern California?  Without violets, you will not have Fritillaries.