Subject: unidentified caterpillar
Location: houston, tx
July 14, 2014 8:53 am
Hi. Found a bunch of these guys yesterday eating my anise plant and nothing else..
People are calling them monarchs, but, I do not agree.
Your input would be most interesting.
Signature: Angela gumerman 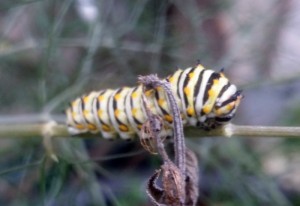 Dear Angela,
You are correct to recognize that this is not a Monarch Caterpillar.  It is a Swallowtail Caterpillar, and considering the Texas location and the anise food plant, it might be the caterpillar of an Anise Swallowtail, Papilio zelicaon, though BugGuide does not report the species as far east as Texas.  The caterpillar of the Black Swallowtail, Papilio polyxenes, looks very similar and it has a more eastern range, and though BugGuide lists food plants as:  “Larvae feed primarily on plants of the carrot family (Apiaceae = Umbelliferae), and some in the Rue Family (Rutaceae). Commonly found on Dill, Parsley, Fennel, Carrot, and Rue in gardens, and Queen-Anne’s-Lace, Poison Hemlock, and Lovage in the wild. They will occasionally be found on Citrus trees”, we believe they will also feed on anise.