Subject: Black beetle with yellow spots
Location: Denton, TX
May 18, 2014 1:54 pm
This little guy ended up on my friend’s neck and we’re pretty sure it bit him. He’s into nature and backpacking but has never seen a bug like this, so we were hoping you could help us identify him!
Signature: Mimi 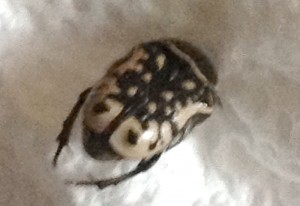 Hi Mimi,
This pretty little Flower Chafer is a Kern’s Flower Scarab, Euphoria kernii, and we quickly identified it on BugGuide where it states:  “This species is extremely variable in its color and pattern ranging from all black to nearly all yellow with all stages in between. “  Any bite would not be considered a problem as the Kern’s Flower Scarab is not venomous. 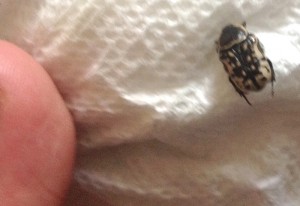 Hi Daniel,
Oh good! Thanks so much for getting back to me. I think he kind of forgot about it after a while but I’ve been checking his neck every so often just to make sure he didn’t break out. Honestly, I’m beginning to have doubts that he was even bitten; I’m pretty sure he’s just a drama queen.

June Beetle from the Netherlands