Longhorned Borer Beetle found in England may be from Belize: Placosternus species

Subject: Not a clue!
Location: Derbyshire, England
April 4, 2014 11:06 am
Hi,
Please could you help me identify this creature? I’ve been scrolling through photos for hours and had no luck. I’m afraid I’m completely ignorant with insects so I can’t even narrow my search.
I’ve found two of these in a Derbyshire bedroom at separate times over the last couple of weeks. I never seen them before, or anything similar, so I would like to know what they are if we’re sharing space.
I’m afraid I haven’t observed any useful behaviours, I just have this photo.
Thankyou for any help.
Signature: Rose 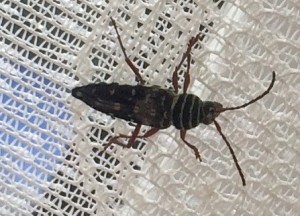 Hi Rose,
This is a Longhorned Borer Beetle in the family Cerambycidae, but we have not had any luck identifying the species.  It is not listed on Mark Telfer’s Longhorn Beetles page, nor on Eakring Birds.  Did you get any new furniture in the room where you have found the beetles?  We don’t want to be alarmist, but it is possible they emerged from the wood used in a new piece of furniture.  We will continue trying to identify the species.

Hi,
There is a wooden bowl my brother bought back from Belize. Looking at it I can see three holes, two have dust around them and one looks like there is something still in it.
As it’s likely these beetles are foreign to my ecosystem, is there some precaution I should take?
Thank you so much for your speedy reply!
Rose.

Hi again Daniel,
I’ve just been in touch with my brother and he says it is a rosewood bowl bought in Placencia Belize that we think it has come from. Hope that can help with the identification?
Thanks again for all your help.
Rose

Hi Rose,
We believe you probably found the source of the introduction of these Longhorned Borers with the discovery of the wooden bowl and its holes.  Many invasive species have been introduced in this manner to various parts of the world, however, we don’t think you need to fear that this tropical species will survive in your much colder English climate.  We will see if we can find a match among species from Belize, though nearby Costa Rica shares many of the same species and there is more comprehensive data on Costa Rican species on the internet because of the ecotourism.

Additional Information and Identification courtesy of Karl
Hi Daniel and Rose:
It looks like a species of Placosternus (Cerambycidae: Cerambycinae: Clytini) which includes the familiar Mesquite Borer (P. difficilis) that occurs as far north as the southern USA , and south to Honduras. There are four species of Placosternus altogether, all of which can be found in Belize, look very similar and include neotropical rosewoods as larval host plants. The adult coloration suggests that they may be wasp mimics. The commonly used rosewood species in Belize is the Honduras Rosewood (Dalbergia stevensoni). FYI, this species has long been a staple in the Belizian artisanal tourist industry (full disclosure – we also bought a few beautiful rosewood bowls in Belize a few years ago), but unfortunately, a massive increase in the harvest in recent years to feed Asian demand has caused concern and the Belizian government has recently implemented a ban on the harvest and export of rosewood. I am not sure if this includes the small-scale production and sale of carved products for the tourist trade. If so, this would be a serious and unfortunate hit on an important village-based income source. Regards. Karl

Thanks for doing this research Karl.  We did notice the resemblance to the Mesquite Borer when we wrote the original identification, and we tried searching its tribe in England to see if there were any relatives.

Hi Karl and Daniel,
Thank you very much for solving the mystery! Thanks for all your time and effort.
Kindest regards,
Rose

Kiawe Round Headed Borer from Hawaii