Subject: Wood roaches?
Location: South Central Kansas
March 17, 2014 11:02 am
Hi there!
I found these guys under an old wood-pile I was moving. It’s pretty cold out still here in my part of Kansas (highs in the 50s-60s F, but lows in the 30s F lately) and they were under the lowest level of the pile, in the leaf litter and bark at the bottom. I’ve also found a few random specimens in my basement since last fall, but they die quickly, I think because it’s too dry. Am I right in guessing these are Parcoblatta sp. (aka wood roaches) of some sort?
P.S. I know the gray/silver ones are isopods. 😀 There were thousands of them under the pile, too… made catching the roaches interesting.
Signature: – Angela, amateur bug nut 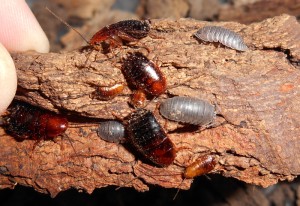 Hi Angela, amateur bug nut,
Thanks so much for sending us your gorgeous photo of Wood Cockroaches in the genus Parcoblatta and their wood pile roommates, terrestrial isopods commonly called Woodlice or Sowbugs.  It is not possible to identify your Wood Cockroaches to the species level.  According to BugGuide:  “in males, wings cover the abdomen; adult females typically have small wingpads (tegmina). Older nymphs may also have prominent wingbuds. Nymphs of different spp. are impossible to tell apart based on known characters; identification of adult females is difficult or not possible, depending on the species and geographic location. Only the adult males have the characters that can definitively identify the species in this genus. Unfortunately, the characters needed are covered by wings, and so identification of living males is not usually possible.”  Your observation that they die quickly in the home is supported by BugGuide which states:  “indoors, they wander aimlessly during the day (rather than congregating in a particular room and being active at night), do not breed, and will die within a few days due to insufficient moisture.” 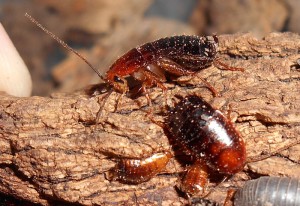