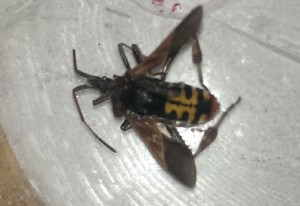 Hi Craig,
The Western Conifer Seed Bug, is a North American species native to the Pacific Northwest.  As early as the 1960s, its North American range was greatly expanded, probably influenced by being able to stow away with the belongings of humans who are getting increasingly more mobile.  We learned that they were first documented in Northern Europe in the early years of the 21st millenium, and it appears that this Invasive Exotic species is now firmly established in the Old World.  British Bugs has additional information.