From the monthly archives: "December 2013"

Subject: red bugs
Location: Sarasota , Florida
December 28, 2013 9:35 am
I’m writing from Sarasota, Florida. In June my neighbour put out some leftover dog food after her little dog died. A few days later there were all this beautiful red and black bugs in various stages crawling around it. They didn’t it the dog food, they went away from it. Even crawling up a tree. What are they?
Signature: Ruth 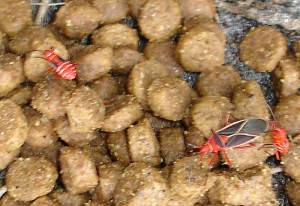 Hi Ruth,
The True Bugs in the photo are immature, wingless Cotton Stainers, Dysdercus suturellus, and winged adults.  In addition to cotton, the Cotton Stainers will also feed on other plants including hibiscus and orange trees, according to bugGuide.  Cotton Stainers, like other True Bugs, have mouths designed to pierce and suck, and it is possible that they were attracted to the moisture in the pet food.

Hi Daniel,
Thank you so much for this information.
Have a wonderful New Year!
Ruth

Subject: scorpion in South Georgia
Location: Screven, Georgia
December 29, 2013 5:53 am
hello
yesterday (December/28/2013) i found a tiny scorpion in my back yard. its maybe a little bit bigger than my pinky nail. we were building up a fire when i saw it on the ground near it. i had been picking up pieces of wood from an old pile and cutting down some brush to add into the fire. i was wondering if you could help me identify the type of scorpion, how venomous it is, and how large it gets. i was also thinking of keeping it as a pet and wonder what insects i should feed it and how often.
Signature: Edgar Flores 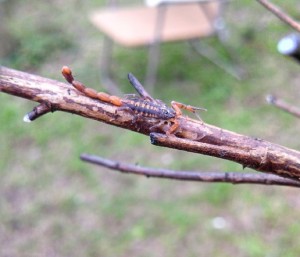 Dear Edgar,
This looks to us like the Hentz Striped Scorpion, Centruroides hentzi, pictured on BugGuide.  According to BugGuide, this species has been found in Georgia and Florida.  It is our understanding that Scorpions with small pincers and larger tails are more venomous, but we cannot verify that.  We suggest you post your photo and questions to a forum like Arachnoboards if you want advice on keeping this little beauty in captivity.  In the meantime, you can try feeding small crickets that are available at a pet store.  It is our understanding that this species is often found under the peeling bark of downed pine trees.

Subject: Kenyan caterpillar
Location: Southern Kenya, East Africa
December 29, 2013 4:26 am
Dear WTB
Would you be able to identify this caterpillar ? It was found by my sister in southern Kenya a day or so ago. It is currently the wet season. The habitat is scrubby bush with acacia. I am waiting to hear if she knows what it was feeding on.
Any help would be appreciated.
Signature: ASP 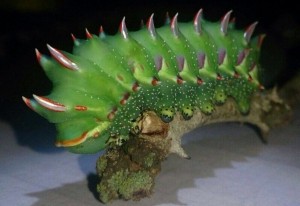 Dear ASP,
We used the World’s Largest Saturniidae Site and your caterpillar looks to us like that of the Western Marbled Emperor Moth, Heniocha dyops.  We then conducted a web search and found a very similar looking caterpillar posted to ISpot that is tentatively identified as that of the Southern Marbled Emperor, Heniocha apollonia, following a robust discussion on the message board that cited a comment Kirby Wolfe made in regards to a photo of a Southern Marbled Emperor Moth from South Africa posted to our site.  The discussion also mentioned that there are at least five species in the genus found in Africa, and members of the same genus often exhibit morphological similarities, so we are confident that the genus is correct.  Since the Western Marbled Emperor Moth is the only member of the genus verified from Kenya, according to the World’s Largest Saturniidae site, we believe that to be the correct species identification for your caterpillar.  African Moths has photos of the adult moth and various Acacia species are listed as food plants.  We will check with Bill Oehlke as well as Kirby Wolfe to see if they can verify that identification.  We are also going to copy Bill Oehlke on our response and we hope you will grant him permission to use the photos if he wishes to include them on his site. 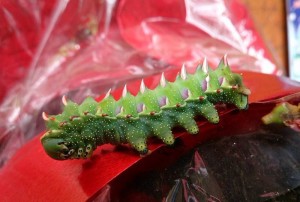 Comment from Kirby Wolfe
Hi Daniel,
I have reared only Heniocha apollonia whose larva looks much like this one, but as you mention, the other species of Heniocha are very likely to look similar.  In fact, there are other species of African saturniids that also have larvae similar to this.  It probably feeds on Acacia, as do the others.  That’s what the mirror-like “spines” are for, to break up the light so the caterpillar can hide in the sparse,  Acacia foliage.  Bill Oehlke likely has photos of most of the Heniocha species’ caterpillars.
Cheers,
Kirby L. Wolfe

Giant Silkworm Caterpillar from the Yucatan

Subject: Odd bug
Location: Northwest Ohio
December 28, 2013 8:18 pm
Dear Bug man,
This picture was taken by myself in Northwest Ohio. It was in the late summer of 2013. I have never seen a bug such as this one. It was crawling up the screen door on the front porch.
Signature: Tri-Ana 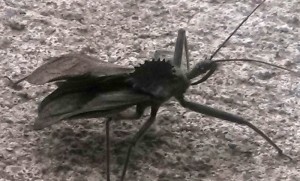 Dear Tri-Ana,
We get numerous requests to identify Wheel Bugs like your individual because of their unusual, almost prehistoric appearance.  Wheel Bugs are predators and they are the largest members of the Assassin Bug family, Reduviidae, that are found in North America.

Subject: Damselfly
Location: mumbai
December 28, 2013 11:06 am
Hey there once again!
we get to see a lot of damselflies and i was able to identify golden dartlets and eastern forktails however this fellow remains unidentified.
Probably still immature
Signature: Sid 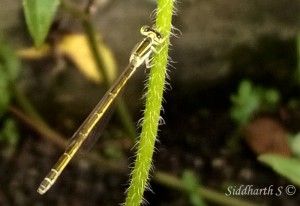 Subject: damselflies
Location: navi mumbai
December 28, 2013 11:10 am
Its dragon fly and damselfly season. i thought it would be cool to post photos of some commonly found damsels.
golden dartlets and eastern forktails are the most common ones here
Signature: Sid 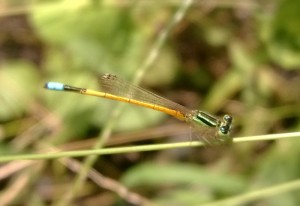 Hi Sid,
Thanks for sending your lovely Damselfly images.  We have combined your two emails into one posting since they can both be categorized as Damselflies.  They are a great addition to our site.  We do have a request.  One submission was listed as Mumbai and the other as Navi Mumbai.  Can you please clarify the difference in the locations if any. 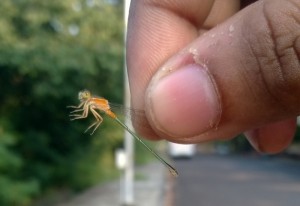 Subject: Please help!
Location: Alaska
December 28, 2013 9:31 am
This was in my bath tub and I’ve never seen this kind of bug before!
Signature: KMB 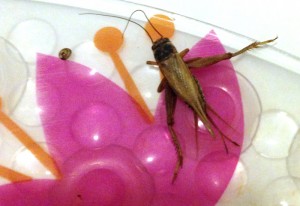 Dear KMB,
This is some species of Cricket in the family Gryllidae, and after searching through images on BugGuide, we believe the long pointed wings most closely resemble the characteristics of the Robust Ground Crickets in the genus Allonemobius.  The dark head and brown wings are also a characteristic we are trying to match.  The image of the Striped Ground Cricket, Allonemobius fasciatus, on PBase is a pretty close match.