Subject: hairy Slater bug?
Location: Albany, western Australia
December 25, 2013 9:41 pm
I’ve got a bug about the size of a pinky finger nail on top of its eggs sitting beneath the hand rail of the verandah. It’s eggs are hairy as is the body of the animal. Very strange, its body shape looks like a cross between a Slater and a giant flea and the front half of a moth with its legs at the front near its nose.
Signature: here 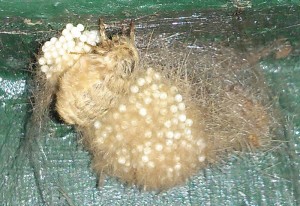 We were struck by the resemblance between your photo and an image in our archive of a flightless female Western Tussock Moth with her egg mass, and we quickly learned that the genus Orgyia is represented in Australia as well.  Birds on the Brain pictures a flightless female Tussock Moth in the genus Orgyia, but she is not identified to the species level.  Butterfly House indicates that Orgyia australis is found in Australia, but does not even indicate that the female is flightless.  The Brisbane Insect website indicates the common name is the Painted Pine Moth and pictures a flightless female.  The Government of South Australia has an excellent pdf on the life cycle of Australian Tussock Moths.  Your photograph pictures a flightless female that has laid her eggs in and on the cocoon she emerged from.  Since she is flightless, she cannot move about in search of a mate, but since she releases a pheromone upon emergence, a winged male can locate her to mate.  The pdf states:  “On hatching, the female remains clinging to the outside of the cocoon where she mates and lays eggs. The eggs are laid in a mass amongst the hairs on the outside of the pupal cocoon. Each female may lay up to 700 eggs. The eggs hatch into tiny caterpillars which swarm over nearby twigs and needles.”

That’s fantastic and interesting! Thanks a lot, I’m so glad you got back to me! Hope you have a wonderful new year!
Linton