Subject: Is this a Wooly Bear Caterpillar
Location: North Louisiana
December 3, 2013 6:07 am
We live in North Louisiana and found this bug on our porch on Dec. 2nd. The thing that is confusing is if it’s a caterpillar why does it have wings up behind it’s head? Would appreciate any help with identifying it.
Signature: J King 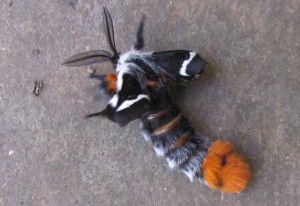 Hi J. King,
This is not a Woolly Bear.  It is a recently metamorphosed Buck Moth in the genus Hemileuca and its wings have not yet expanded.  When they emerge from the pupa, many moths bear a strong resemblance to caterpillars, but once the wings expand, few people are likely to continue to see the resemblance.  Buck Moths get their common name because they fly very late in the fall and they are often encountered by hunters during deer season.

Thank you so much for identifying this moth – I have never seen one before and it was a thrill.  We did get to see it after it developed more but missed it when it flew away.