Subject: Dung beetle or something else
Location: Mumbai India
November 18, 2013 8:27 am
I found this bug outside my door . It was almost still . I snapped a few pics of it.
Signature: Akhilesh Singh 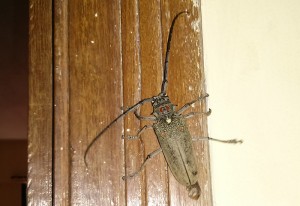 Dear Akhilesh,
This is not a Dung Beetle.  It is a Mango Stem Borer, Batocera rufomaculata DeGeer, one of the Longicorns in the family Cerambycidae.  According to Discover Life:  “B. rufomaculata is a polyphagous species which attacks both living and dead trees. While it tends to attack living trees which are stressed, it will also sometimes attack apparently healthy trees. The host range differs throughout the species’ range, but mango and fig are the two most commonly attacked hosts. … Mango and figs are the main hosts throughout India and South-East Asia, the main range of the species; however, many other hosts are known including rubber and Dyera costulata . Duffy (1968) listed about 50 known hosts. The species has also been recorded as a pest of cashew timber ( Anacardium spp. ) in Kerala, India (Gnanaharan et al., 1985) and mulberry ( Morus spp. ) in India (Butani, 1978; Sharma and Tara, 1985).”