Subject: Giant caterpillar like creature
Location: San Miguel de Allende, Mexico
October 26, 2013 2:36 pm
Dear Bugman:
Any idea what this is? It’s about the size of an adult human’s index finger. It’s October 25th and three of them are clinging to a Virginia Creeper vine and the fourth is crawling along the top of a wall. This is in San Miguel de Allende, Mexico.
Signature: David 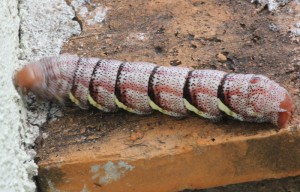 Hi David,
Because of the prominent caudal bump that remains when the caudal horn that is prevalent in most Sphingidae Caterpillars, we deduced this caterpillar to be a member of the genus Eumorpha.  We searched the representatives from the species on the Sphingidae of the Americas website, and quickly located a visual match with the Caterpillar of the Typhon Sphinx, Eumorpha typhon.  You may also see an image of the Caterpillar of the Typhon Sphinx on BugGuide.  The only food plant listed for the caterpillars is grape, but we have learned that many caterpillars that feed on grape will also eat Virginia Creeper.  We will be postdating your submission to go live during our absence from the office in early November. 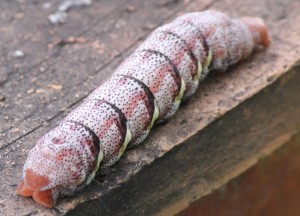