Subject: Mystery beetle in a state park
Location: Saint Edward Park, WA state
October 11, 2013 7:53 pm
Hello WTB magicians!
I stumbled onto this site when trying to find out what a local beetle is, and I’m so amazed by it! Thanks for doing this, it looks like a wonderful resource for solving some of the mysteries of the bug world.
The bug I would like to identify is one that I saw recently in abundance wandering the trails of Saint Edward state park in Washington state, USA. My husband and I tried to take a few pictures of them running around on the paths, but they were too fast for any of our photos to turn out, so we gently scooped one into a shallow tupperware dish to temporarily corral it so we could get better shots. (She has already been released outside)
They have long legs and are quite fast. We thought maybe it is some kind of tiger beetle, but we know sometimes those can be pretty aggressive, and this one was not bitey in the least. The photos don’t show it very well with the unnatural light being used, but their abdomen has a rich reddish-purple sheen, and there are little facets around the edge of it that sparkle in the natural light. We didn’t have a ruler handy, but we put a dime near her for an idea of the size.
Thank you so much for your time and effort, I hope you can work your magic on this one! Cheers!
Signature: – A grateful bug enthusiast 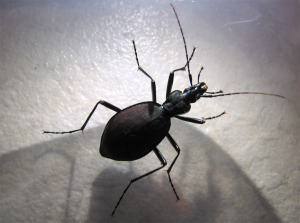 Dear grateful bug enthusiast,
We believe we have correctly identified your Ground Beetle as a Snail Eater, Scaphinotus angusticollis (Mannerheim 1823), thanks to swell photos posted to BugGuide.  According to BugGuide, their habitat is “Mostly forests, under logs, rocks, in leaf litter” and they “Feed on snails, slugs. Mandibles specially adapted for insertion into opening of a snail’s shell.”  Ground Beetle often run quickly as you observed.  Tiger Beetles are one subfamily of Ground Beetles, so your comparison is valid. 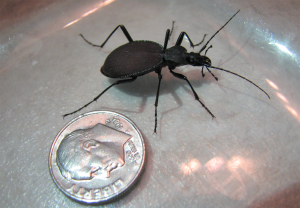