From the monthly archives: "September 2013"

Subject: I wonder if you’ve seen some of these before…
Location: Pointe-a-la-Garde, Quebec
August 31, 2013 6:20 pm
This evening, 8 of these bumblebee/beetle type insects invaded my house. My dog injured one of them and then three other of these insects attacked and killed the injured one.
Signature: Thanks for taking a look! Alex. 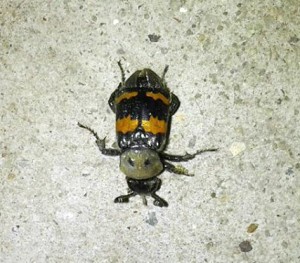 Dear Alex,
This is definitely a Burying Beetle or Sexton Beetle in the genus Nicrophorus, and we are relatively certain it is the Tomentose Burying Beetle, Nicrophorus tomentosus based on photos posted to BugGuide.  Burying Beetles often bury small dead animals and the putrefying flesh acts as food for developing larvae.  Adults often work in pairs to bury small animals and they defend the young, a behavioral trait that is very rare in beetles.  We don’t understand why you had such a sighting, unless you have an earthen floor in the basement or there was a dead animal somewhere in your home that acted as a breeding ground for this group of beetles.  The feeding melee that resulted after one individual was injured was a very interesting observation.  They are probably very hungry and just want to get out of the house. 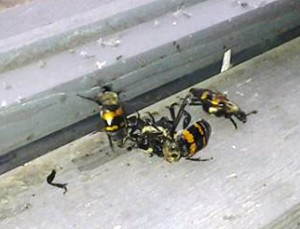 Thank you so much Daniel.  I have been digging out my 100+ year old foundation, and I have found some quite large burrying holes around the exterior of the house.  Although I do have many grass snakes that take care of my rodent (non-issues).  Plus there are bats, hawks owls and eagles here, so the odds of finding dead rodents are probable.
Thanks for having your site!
Alex.

Subject: Large GORGEOUS green mothlike insect
Location: Charlottesville, VA
August 30, 2013 5:57 pm
This was clinging to the doorframe of my tobacconist in Charlottesville, VA, today around 10. The clerk said it had been there when she came in to open the shop, and she’d seen another one recently. As I watched, it moved its legs just enough to indicate it wasn’t dead, but otherwise it didn’t seem responsive — given the date, it’s presumably at the end of its lifespan. The photos were taken with an iPhone 5. At first glance, it looks like a moth or butterfly, but the antennae seem to be missing, the legs are all weird, and the body doesn’t really look right either.
I think that’s all the vital data, so I’ll go on to say OH MY GAWD THAT IS GORGEOUS. It’s obviously forest camo, (at first glance, the clerk actually thought it was a leaf), but that kind of shading is something I’d usually associate with fungi or seashells, rather than something that’s just trying to be inconspicious.
Signature: Dave Harmon

Subject: Second follow-up on my “Ask WTB” submission (Pandora sphinx)
August 30, 2013 6:44 pm
And having finally thought to seach for “Sphinx” itself, on page 16 or so I find the Pandora Moth, which exactly matches the pattern.
Signature: Dave Harmon 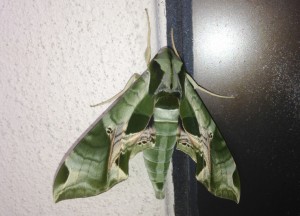 Hi Dave,
We see by your followup letter that you have already identified your Pandorus Sphinx.  Your letter is very entertaining.

Subject: Is This Thing from Narnia
Location: Raleigh, NC
August 31, 2013 8:42 am
We found this bug just crawling around near our house in the grass. It looks like it could be some type of catepillar but it’s HUGE. Help?!
Signature: Freaked Out Dude 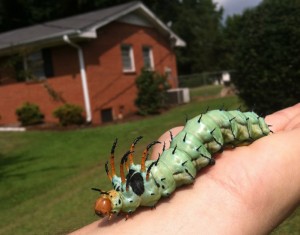 Dear Freaked Out Dude,
Your photo of a Hickory Horned Devil is awesome.  This is the largest caterpillar in North America.  It feeds on the leaves of hickory, walnut and several other native trees.  The caterpillars are rarely noticed until late in the summer when they leave the trees they are feeding upon and find a suitable place on the ground to dig and pupate.  In the spring, they emerge as adult Royal Walnut Moths.  Some of our readers have compared Hickory Horned Devils to colorful Chinese dragons.  They are perfectly harmless, despite the fearsome appearance.

Subject: Rainbow fly
Location: Freetown, Sierra Leone, West Africa
September 1, 2013 4:16 am
Hi,
I saw this one on new years eve in Freetown, a couple of years ago, do you have any idea what this bug is called.
Thanks
Signature: Brgds 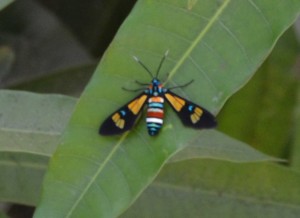 Dear Brgds,
This turned out to be a much quicker and easier identification than we anticipated.  This is a Wasp Moth in the subfamily Arctininae, and when we looked up Wasp Moth, we found this similar looking species of Wasp Moth from India, Euchromia elegantissima.  We then searched that genus in South Africa and found another posting in our archive of your species, Euchromia amoena.

Subject: Moth mates
Location: Dallas
August 31, 2013 7:10 am
I found a large cocoon that dropped from tree and after 10 days a beautiful moth hatched. The next night , a male moth found her and mated. He left that afternoon and she left that night. It was a beautiful but fast life cycle to observe but what kind of moth was she? She had fat furry body and he had huge plumed antennae.
Signature: Connie the one in dallas 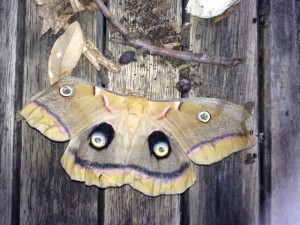 Hi Connie,
You are so lucky to have witnessed and photographed the emergence and subsequent mating of your female Polyphemus Moth.  Though the pheromones of the female are quite a powerful attractant to the male, if there are no mature males nearby, or if they encounter hungry predators while on the way, the luckless female will not mate and she will not produce fertilized eggs. 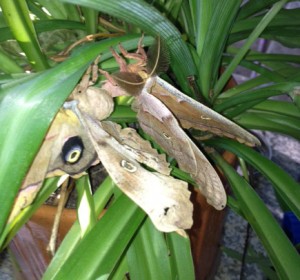 Female Polyphemus Moths that are lucky enough to mate will produce several hundred eggs to perpetuate the species. 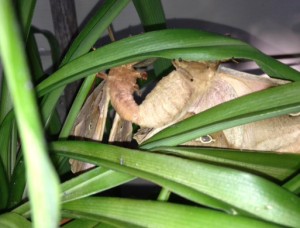