Subject: What is this?!
Location: Orange County, CA
September 29, 2013 1:57 am
Earlier today my grandma found this bug outside her hotel room. Neither of us knew what it was or if it is dangerous or not. We both think it looks like a giant ant or termite. I hope you can tell what it is. Thank you.
Signature: Maggy 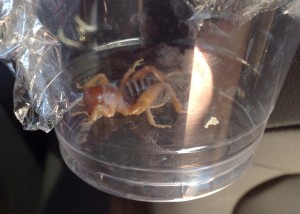 Hi Maggy,
This is a Potato Bug, one of the most iconic of Southern California insects.  Daniel just encountered a Potato Bug while doing yard work yesterday, and he stopped to take some photos.  He thought it was a somewhat unseasonal sighting because most reports of Potato Bugs come after the rains.  Santa Ana winds were blowing earlier in the week and things are very dry, and we would not expect Potato Bugs to be coming to the surface under such arid conditions.