Swallowtail Caterpillar about to transform

Subject: Caterpillar in the process of becoming a chrysalis?
Location: Southwestern Shaanxi Province, China
September 23, 2013 10:15 pm
Hi Daniel,
Found this on the wall of the bike sheds outside my apartment block and wondered if it was a caterpillar (not sure what species) in the process of starting its pupation? I’d love to know!
Signature: Paul UK 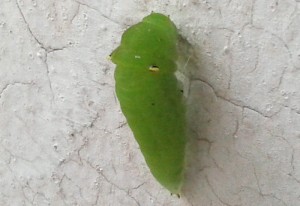 Hi again Paul,
The general shape of your caterpillar, its vertical orientation and the silken girdle holding it upright are all indications this is some species of Swallowtail Caterpillar.

Update
Subject: Chrysalis Update
Location: Southwestern Shaanxi Province, China
September 29, 2013 8:28 pm
Thought you might like an update on the caterpillar which was about to transform. I went to see the progress it was making and it has begun its pupation. It’s weird how different the chrysalis looks from the caterpillar!
Signature: Paul UK 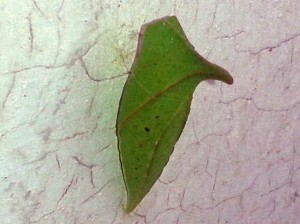 Hi Paul,
Thanks for the update on the Swallowtail Caterpillar.  We are very curious about the adult butterfly.  Though this chrysalis shares certain features with our more familiar North American Swallowtail species, including the silken girdle and the upright orientation, that thoracic “thorn” is totally unfamiliar to us.  We hope you send us some images of the adult Swallowtail once it emerges.

October 3, 2013
Hey Daniel,
I have since noticed several more of these pupating swallowtails around our garden. Most of them are upright although 1 or 2 have been horizontal on the ceiling of the bike sheds. They all have the silk girdle holding them in place and the thoracic thorn, although some thorns point towards the head and some to the abdomen.

Thanks for the update Paul.

Swallowtail Caterpillar, but which one???

3 Responses to Swallowtail Caterpillar about to transform