Subject: Blue Mud Wasp – Queen?
Location: West Virginia
September 23, 2013 9:06 am
Hi bugman,
This summer we’ve had these odd wasps on our pool house screen window, they didn’t seem to be aggressive at all. They were slightly metallic blue and their wings fluttered different from most wasps. They left just black spitted stuff on the window frame and they seem to be gone now. The bug in the photo was found just a few days ago and I’m wondering if she is their queen. She was about 30 yards from where the other ones were. I found her having a hard time climbing up the brick of our house. She/it didn’t seem to have wings & I didn’t see her fly at all. Any ideas?
It is nearly fall here in the lower lands of West Virginia.
Signature: Maria 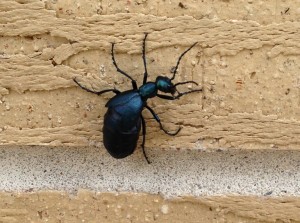 Hi Maria,
Your insect is an Oil Beetle, one of the Blister Beetles in the genus Meloe.  People often mistake them for queen ants.  Blister Beetles should be handled with caution as they can exude a compound known as cantharadin that is known to cause blistering in human skin.

Hi Daniel,
Wow, glad I didn’t play with it! 😉  So I guess the wasps having the same metallic look is just a coincidence.  Thanks!
Maria

Endangered Oil Beetle from the UK