Update:  February 29, Leap Day 2016
Upon linking to this old posting from British Columbia, we realized these are Western Boxelder Bugs, Boisea rubrolineata, NOT their eastern relatives.

Subject: Red Bug ID…Please
Location: Golden,BC., Canada
September 20, 2013 3:51 pm
These bugs seem to have appeared very quickly and I have never seen them in this area berfore. I need to know if they are harmful to my family or my home. They also seem to be multiplying very quickly. Any info you may have would be greatly appreciated. Thank you.
Signature: Claude Poirier 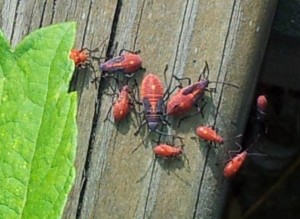 Hi Claude,
Eastern Boxelder Bugs, or Democrat Bugs as they are also called in parts of the midwest south of the border from you, do not pose any threat to your family or home, but they can become a nuisance if they get plentiful, especially since they have a habit of entering homes to hibernate when the weather begins to cool.