Mormon Cricket Which Admiral is it???

Subject: Red-Spotted Purple AND Western White Admiral!
Location: Naperville, IL; Grand Teton, WY
August 19, 2013 8:57 pm
Dear Daniel~
I know you dislike it when folks send photos of two different species in one submission, but as these are actually two different *sub*species, and one led me to the other, in effect, maybe you’ll forgive me?
I was so happy this morning because I saw a flash of what I initially thought was my garden-variety Black Swallowtail butterfly (I think we don’t have Pipevine Swallowtails around here) when I noted the lack of distinctive Swallowtail hindwings. I have never seen a Red-Spotted Purple in my yard before, so you can imagine how excited I was.
Then, later on this evening in the course of finding the scientific name for the Red-Spotted Purple, I discovered that a butterfly I photographed (badly, I might add, but it was flitting around so quickly) last week in Grand Teton National Park and was struggling to identify was none other than a Western White Admiral, a different form or subspecies of Limenitis arthemis, my beloved Red_Spotted Purple.
How thrilling!
I hope you have a wonderful evening!
Signature: Dori Eldridge 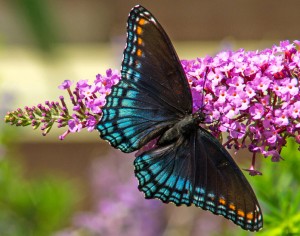 Hi Dori,
Your photos of the Red Spotted Purple are lovely and we are thrilled that you have views of both the dorsal and ventral surface.  We saw some in Ohio in June, but alas, we did not have a camera, which is one of the reasons we traveled with a camera in August.  Your rationale for submitting the two sightings together makes perfect sense, and in the past we would not have had an issue creating a single posting since both are classified as Brush Footed Butterflies, but with our new mapping feature, we can only have one location per posting, so we are dividing your photos and posting the content of the email twice so the Admiral can have its own location memorialized.  Thanks again for your submission. 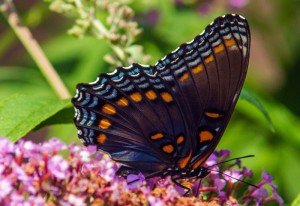