Subject: swelling and itching bug bite
Location: Lake County, CA (hot summers)
July 28, 2013 11:23 am
Hi Bugman, A couple months ago various parts of my body–first my forearm, then a few days later my knee, then forehead, then lower arm, suddenly became very very hot, red and swollen, and itchy. The area of redness was 2-3 inches in diameter, though the swelling spread even further and even became somewhat of a pitting edema. In the knee it was so swollen it became hard to bend. In the arm, the swelling extended from the elbow to halfway down my forearm. These symptoms lasted 4-6 days usually, then resolved. I suspected a bug bite of some kind because of how localized they were and how suddenly they came on. Also I live in the country where bugs abound and often get into the house. I live in a rural area of typical Northern California grassy hillside with some oak and pine trees, with hot summers and a fair number of below freezing winter nights. When I searched my bed, I found two of the bugs pictured…What’s the bug, and do you think it was th e culprit that caused these symptoms? And could it cause any long term consequences (like ticks which cause Lymes Disease). One clarification of the picture…the back end of the bug has a drop of water on it, which makes it appear more shiny than it really is.
Thanks for any help.
Signature: Bugbitten

Dear Bugman-
I just submitted an id request. I forgot to say the bug is about 3/4 inches long.
Thanks, 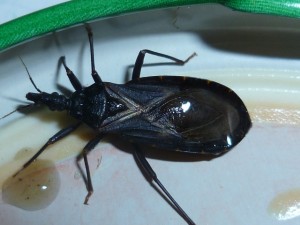 Dear Bugbitter,
This sure looks like a Western Conenose Bug, Triatoma protracta, to us, in which case it could not only be responsible for the bites, but also some long term consequences, namely Chagas Disease.  According to BugGuide, Conenose Bugs are:  “Hematophagous, feeding on blood from tetrapods. Most common hosts are mammalian but avian, reptilian and amphibian hosts are recorded. The most common wild hosts are wood rats (Neotoma) but other common ones include armadillos, opossums and raccoons (possibly also skunks); synanthropic species may feed on livestock (horses, cattle, chickens), pets and humans.”  BugGuide also notes:  “Bite can cause severe allergic reaction in many humans. Bite and defecation into bite can transmit Chagas disease, caused by Trypanosoma cruzi, a protozoan. The most notorious vector is T. infestans, found in South America. The North American species are not normally thought to transmit the disease, though they can carry the parasite. (The North American species do not normally defecate at the site of the bite, which is what actually transmits the parasite–see Kissing bugs (Triatoma) and the skin. The CDC site says that rare vector-borne cases of Chagas disease have been noted in the so. US.”   See BugGuide for a photo of a Western Conenose Bug.  We would urge you to seek a second opinion on our identification and we would also urge you to seek some medical attention.  Though we doubt that you have contracted Chagas Disease, it is possible, and at any rate, it seems you have had a severe negative reaction to the bites.

Daniel,
Thanks so much for your quick response and immensely helpful information.  It sure does look like the Western Conenose pictured on BugGuide.  These incidents happened about 2 months ago (and also previously a couple years ago).  I still have the dead bug in a jar.  I’m thinking I should hang onto it for ID purposes or if there is any kind of test to do on the bug to test for the parasite.  Do you have a suggestion as to (1) who I might bring it to for second opinion on ID, and also (2) is there some way I should preserve it in the meantime?  Although it sounds like it’s rare to get Chagas disease in North America, I will still get it checked out medically.  Do you have any suggestions as to doctors who are knowledgeable about insect mediated diseases?  I don’t know that a general practitioner would know or adequately follow up.  Interestingly, when this happened a couple of years ago, I also found these same bugs on the wall behind my bed, took a picture of them and brought it to my doctor.  However, concurrently, I was suffering from hives, and so once that was diagnosed, nobody thought any more about the bugs and that they might be the cause of anything.  Both this time and two years ago, the swelling and itching went away in a few days for most of the bites, although this time, the bite on the forearm still continued to itch for weeks afterward, which somewhat concerns me.
Thank you so much for your help.
Deborah

Hi Deborah,
This is kind of out of our league.  You can try BugGuide for a second opinion on the identification, or better yet, your local natural history museum if they have an entomology department.  You should consult with your family physician regarding any tests for Chagas Disease.