Subject: Eastern Cicada killer wasp in the West?
Location: Albuquerque, NM
July 13, 2013 10:18 am
I have seen this giant wasp-like thing feeding on nectar for the past four days or so. Research on Wikipedia was insufficient to determine what kind of Cicada Killer it is (although it assured me I could get close enough to take pictures). I live in Albuquerque, NM and this seems to match closer to the Eastern Cicada killer than the Western or Pacific. Any thoughts would be helpful! This same bush has also played host to a fantastic Tarantula Hawk in the past.
Signature: Desert dweller 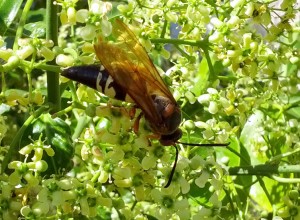 Dear Desert dweller,
We agree that this is an Eastern Cicada Killer.  We checked on BugGuide, and there is at least one sighting from New Mexico and at least one from Colorado, but that appears to be the westernmost reach of its range.

One Response to Eastern Cicada Killer