Subject: Iridescent Hymenoptera (or Hymenoptera mimic)
Location: Eastern Nevada County, CA
June 17, 2013 11:25 pm
I found this insect visiting a patch of Hackelia velutina growing on a mountainside (fairly rocky terrain with scattered Red Fir, Lodgepole Pine, and Sierra Juniper; elev. 7850 ft.) It landed while I was taking a photo of a flower cluster, but unfortunately left before I could get a closer shot of it, so all I have of it is this crop.
At first glance, it appeared to be some sort of bee, but the thin, hairless, yellow legs suggest otherwise. Now I’m thinking it might be some sort of Syrphid fly mimicking a bee, but that family seems to be such a big mixed-bag that I wouldn’t even know where to start to narrow it down, if that’s even it.
Any clue as to what this iridescent little fellow is?
Signature: Tom 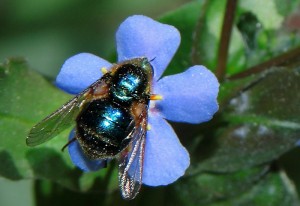 Dear Tom,
This reminded us of Small Headed Fly photos we have posted in the past, and upon searching BugGuide, we believe it looks like a good match for Small Headed Flies in the genus Eulonchus.  Eulonchus smaragdinus, which is pictured on BugGuide, has yellow legs.

Eric Eaton Concurs
Daniel:
I’m out of town with limited internet access until June 25 (Tuesday)….
I’d agree the genus is Eulonchus, most likely, but the genus needs revision, so no telling which species.
Eric