Subject: MOTH
Location: Westdale Western Australia
April 19, 2013 5:46 am
Hi
We found this large grey moth on the ground at our property in Westdale. It was about 12cm long. Just wondering if you could please tell me what it is. Much appreciated.
Signature: Thanks Michelle 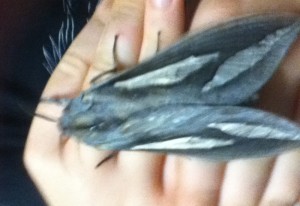 Dear Michelle,
This appears to us to be a Swift Moth or Ghost Moth in the family Hepialidae.  The Csiro website has photos that indicate it might be
Avantiades labyrinthicus or a closely related species.  Photos on Dave’s Garden and the Morwell National Park website support that ID.  Though BugGuide is dedicated to North American species, these remarks about the family Hepialidae should also pertain to your moth:  “Explanation of Names Ghost Moth – to attract females, the male hovers over open ground, sometimes slowly rising and falling [like a ghost] (wikipedia.org)  Swift Moth – adults are rapid fliers” and “Early instar larvae feed on plant detritus, decaying wood, or fungi; later instars bore into roots or stems of woody plants, or feed on moss, and the leaves of grasses and other herbaceous plants.
Some adults cannot feed because they lack mouthparts.”  BugGuide also notes:  “Considered a ‘primitive’ moth because of a combination of adult and larval characters. Adult moths lack a strong wing coupling mechanism and instead use a “jugum”, which is a thumb like projection between fore- and hindwings. Wings do not remain coupled while in flight. While present in other primitive lepidoptera, the exact function remains speculative. This feature is often strongly, and best, developed in the Hepialidae. Adults also have reduced or sometimes absent mouthparts.”  Finally, the Strathbogie Ranges Nature View website has a very nice posting on the Swift Moth including a link to this wonderful old article from a 1947 edition of The Tasmanian Naturalist.

Another Giant Wood Moth from Australia
Tagged with → WTB? Down Under
Location: Westdale, Western Australia