Subject: Spider Wasp
Location: White River, South Africa
April 19, 2013 6:58 am
Hi Bugman
Thanks for your reply. As it happens I did take some photographs. My wife has most of the shots and it going to try and upgrade the quality of the photos, but I have attached three in their original state for your perusal.
Signature: Steve 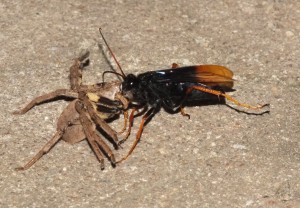 Dear Steve,
Thank you so much for writing back and providing photos to the comment you posted on the Spider Wasp from South Africa posting.  Many Spider Wasps have a metallic sheen and we are curious if your personal observations included the purplish color of the posting you commented upon.  We get most of our Spider Wasp and Huntsman Spider submissions from Australia.  We are running a bit late this morning, but we will try to identify this species of Spider Wasp in the near future.  Your photos are wonderful.  We believe that the Spider Wasp might be dragging the Spider up the wall in an effort to glide as far as possible.  The wasp could never get off the ground with such a heavy payload, but by taking off from a higher elevation, she can still make use of flight to return to her burrow. 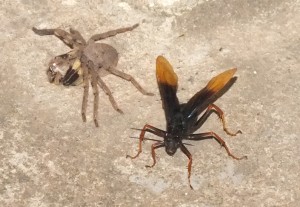 Thank you for reminding us that Huntsman Spiders are known as Rain Spiders in some parts of their range.  Your previous comment mentioned the pain of the sting.  Do you know this firsthand.  North American Tarantula Hawks, another large group of Spider Wasps, are also reported to have among the most painful stings of any insect. 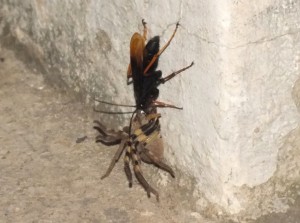