Subject: Giant mealybug ? Scale?
Location: Glendale, California, USA
April 9, 2013 9:30 pm
Greetings Bugman – It is windy indeed around the corner here in Glendale!
Yesterday I removed the ties around a wood stake that was supporting a newly planted albizia tree in my backyard. Bright orange, egg-yolk-looking stuff smeared on my fingers and I found little groupings of these creatures beneath several of the ties.
They look like mealybugs, but they are huge! A quarter of an inch long, at least. Can you identify them? Are they beneficial, destructive, or neutral?
Thanks in advance.
Signature: Janine in Glendale 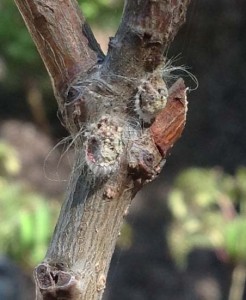 Hi Janine,
It is currently calm, but we understand the winds are supposed to return today.  We believe these are Cottony Cushion Scale, and we believe that is the insect we found on our endangered California Black Walnut last year.  When we manually smashed them, they were orange.  You can read about the Cottony Cushion Scale on BugGuide where it states:  “Hosts include many plants, though in FL Citrus and Pittosporum are most commonly affected.”  The University of Florida Featured Creatures states:  “The mature females (actually hemaphrodites) have bright orange-red, yellow, or brown bodies (Ebeling 1959). The body is partially or entirely covered with yellowish or white wax. The most conspicuous feature is the large fluted egg sac, which will frequently be two to 2.5 times longer than the body. The egg sac contains about 1000 red eggs (Gossard 1901).”  You should try to eliminate the Scale.  According to the Featured Creatures:  “The cottony cushion scale can severely damage trees, resets, and nursery stock. Decreased tree vitality, fruit drop, and defoliation result from the feeding of this scale. Most damage occurs from the feeding of the early immature stages of the scale on the leaves, where they settle in rows along the midrib and veins, and on the smaller twigs. The older nymphs continue to feed, but migrate to the larger twigs, and finally, as adults, they settle on the larger branches and trunk. This scale is seldom found on the fruit. Added damage can result from the accumulation of sooty mold due to the honeydew excreted by the scale.”