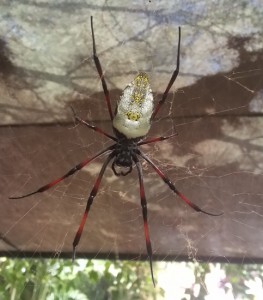 Hi Jeremy,
While trying to determine your Orbweaver’s identity, we found this online article from Wildlife Extra with the headline “New ‘giant’ Golden orb spider discovered in South Africa” describing the discovery of a new species of Nephila in museum collections and they verifying it in the wild.  The photo illustrating the article was of Nephila inaurata, which looks surprisingly like your individual, but the article was about a different species, Nephila komaci, that was not pictured.  So, while your spider is in the same genus as the newly discovered spider, it is a different species.  The Red Legged Golden Orb Spider, Nephila inaurata, is also pictured on BioDiversity Explorer.  Spiders in the genus Nephila spin webs made of golden silk.