Subject: Caterpillar that ate my Satsuma
Location: Livingston, Louisiana
March 23, 2013 7:34 am
It has been a while since I took this picture (it took me a while to find the picture). Around this time last year, can’t remember the specific day, I found this caterpillar on my small Satsuma. I have never seen a caterpillar like this one in my life. So I took a picture of them so I could see what they were. I found them on your web site, the Giant Swallowtail, but what I am wanting to know is – Do they hang around this area much? I live in Livingston Louisiana. I have lived at this residence for 15 years and this was the first time I had seen them. The small Satsuma they ate was mostly thorns. The Satsuma had been in the back yard for two years before I saw the caterpillars. Are they in this area much? If so I will leave the tree for them to snack on. I did not get to see the Butterflies and the caterpillars were gone the next day. I would love to see them in my yard more often. How can I do to get them to come back? What really peaked my curiosi ty was when my son touched one of them it put out a nasty odor and these bright red feelers or antenna. What do I need to do to bring one indoors to watch it emerge from a cocoon?
Signature: Rebecca Lambert 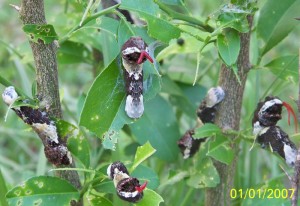 Hi Rebecca,
This might be our favorite photo ever of Orange Dogs, the caterpillars of the Giant Swallowtail, Papilio cresphontes.  We generally tell home gardeners that despite the caterpillars feeding on the leaves, the trees will survive and butterflies will follow, but we never get reports of so many Orange Dogs on a single tree.  Perhaps there was no other nearby food source, and that is why so many eggs were laid in one place.  Swallowtails deposit eggs singly, not in a cluster like some other insects.  We also love that your photo shows so many individuals with the osmeterium exposed.  The red horns, as you indicate, are a defense mechanism that acts as a visual deterrent as well as an olfactory one.  You are within the natural range of the Giant Swallowtail, a native species that fed on common pricklyash and other native plants prior to the introduction of citrus.  Cultivation of citrus has allowed a range expansion to occur and now Giant Swallowtails are common in southern California, a portion of the country that they are not native to.  The coloration of the Orange Dog is thought to resemble droppings from a bird, which acts as an additional camouflage protection.  You should be able to raise a caterpillar in an old aquarium with a screen top if you want to observe the eclosion.  We would also suggest planting nectar plants including lantana and composites like echinacea if you want to attract additional adult Giant Swallowtail butterflies to your garden.  Your letter indicates you took the photo last year, so we are guessing the 2007 date stamp is incorrect. 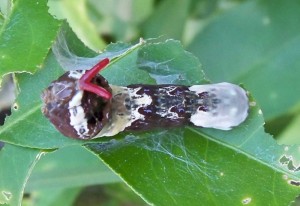