Subject: Mexican Mesquite Bug
Location: Tulum, Quintana Roo Mexico
March 17, 2013 7:56 am
You have a couple of picture of these identified as nymphs of Mexican and Costa Rican Mesquite Beetles. I am enclosing a picture taken at Tulum Mexico in March 4th in which there appear to be two stages of the bug – does this help to identify the species?
Signature: Gord Wakeling 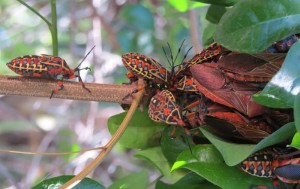 Dear Gord,
These are Giant Mesquite Bugs in the genus Thasus, but we cannot say for certain which species it is.