Can Centipedes really Crawl up your Butt???

Subject: Worm found in my 10 month old daughter
Location: Davie, FL
February 14, 2013 9:34 am
Hi there,
Two days ago we had our kids in our pool and the baby who is 10 months old was crawling around on the top shelf of the pool. She had no diaper on and I noticed something kind of hanging out of her rear end. Upon closer inspection my husband and I realized it looked like a worm! He pulled it out and a worm about 4 inches came out. I took her to the ER with the worm (my husband put it in a plastic solo cup for me). They gave her some medicine to treat tape worms although, they all said they never saw this type of worm and half the staff was convinced its not a tape worm. I don’t think it is either. They kept the worm and sent it to pathology to be tested, and they still haven’t figured out what it is. She passed one more in her poop, smaller and dead that night when we came home. Nothing else since that I’ve seen. She hasn’t been out of the country. Has never been outside on the grass. She only eats baby food out of the jar and her formula is a hypoal lergenic formula as she has a severe milk protein allergy. The only animals shes been near is our 2 dogs (whom I should mention spend a great deal of time outside with our neighbors horses and with our African spur thighed tortoise). She’s never been near our tortoise. The dogs unfortunately do eat the horses and tortoises poop sometimes :-/. She has on occasion gotten a hold of their dog food bowls and gotten a piece or two in her mouth. We’ve actually relocated their bowls to an area she cannot get to before this even happened. For over a week now she’s had diarrhea, loss of appetite and has been more sleepy then usual. She has been rather cranky as well, which is all very out of character for her. I hope you can help us out. We’re concerned as you can imagine and just want to know what this is.
Signature: Concerned Mommy 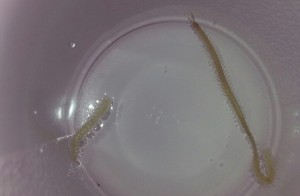 Dear Concerned Mommy,
We are not qualified to deal with medical issues, and we believe you have done the right thing in seeking professional assistance in this matter, however, we will offer you our opinion.  The creature in the photo you supplied looks like a Centipede and not an intestinal parasite.  The appendages like legs and antennae are far too developed for an intestinal parasite.  We suspect your infant somehow encountered a Centipede that fell in the pool.  As far as her lethargy goes, we suspect that might have to do with the medication.  We would suggest you contact the ER to see if the medication they gave her would lead to her symptoms.  You should also take the second organism she passed for professional analysis.  We might be wrong on this matter, but we are giving you our opinion.

Thanks for the quick response, I really appreciate it. The lethargy and other symptoms began prior to discovering the worm and before taking the medication. The worm/centipede was literally pulled out of her anus (so sorry for bring so graphic). The smaller piece you see was what was hanging out of her rear, when my husband pulled it broke off. He grabbed the other piece that was hanging out of her rear and the longer piece is what he pulled out of her. I’d changed her diaper before then and there was nothing there. She was on the pool shelf just minutes before I saw it and she was right next to me. I can’t imagine it crawled up in her that fast without me noticing? Do you think iymt crawled in her?

Dear Concerned Mommy,
We are speechless on this matter.  We would love a followup email when the pathology report on the critter comes back.

Update:  Soil Centipedes reportedly passed through human gastrointestinal system
This is a real long shot, but it is not entirely unheard of to have passed centipedes. It is thought that they may be ingested along with vegetable matter. Geophilus carpophagus has been removed from humans before, and it lookd fairly similar to the one in the picture. Check out the book “Sanitary Entomology” by William Dwight Pierce. It’s an old one, but it covers a few accounts like this. I’d never have thought it possible if I didn’t read it myself. It seems that the species in Geophilus are the most “common.”
sccabrian

Dear sccabrian,
Thank you for this fascinating bit of information.  According to BugGuide, the Soil Centipede order is Geophilomorpha, but BugGuide does not recognize the genus you mentioned.  The book was published in 1923, so there are most likely significant taxonomy changes since that time.  We did a web search of “Geophilus sanitary entomology pierce” and we were led to page 490 where the following information is provided in columns:  “Disease …  Pseudoparasitism of nasal and alimentary passages by centipedes;  Causative organism … Chaetechelyne vesuviana, Geophilus carphophagus, Geophilus cephalicus, Geophilus electricus, Geophilus similis, Himantarium gervaisi, Julus londinensis, Julus terrestria, Lithobium forficatus, Lithobius melanops Polydemus complanatus, Scutigera coleoptrata, Stigmatogaster subterraneus;  Insect transmitter … Same as preceding. [note Blatta orientalis]; Method of insect transmissions … Inflammation is caused in the nasal and alimentary passages due to the accidental entrance of centipedes, probably during sleep or in fresh vegetable foods.  Nature of Insect role … Direct attack.”  The book does not indicate if the Soil Centipedes are able to pass through the G.I. tract alive, but we seriously doubt it.  We cannot understand why “Same as preceding” in the Insect transmitter column has any relationship to Blatta orientalis, the Oriental Cockroach except that perhaps Cockroaches might also create problems if they are eaten.  Thank you so much for providing this information.  We don’t know what Concerned Mommy’s doctors will be able to do with it though.  If our understanding is correct, eating a Soil Centipede can cause Pseudoparasitism or false parasitism which is an inflammation of the alimentary passages.  For many years we have been claiming that House Centipedes are perfectly harmless, but the obsolete scientific name for the House Centipede is   Scutigera coleoptrata and it is on the list of causative organisms.  We will have to caution our readership that House Centipedes might crawl up their butts.  Sanitary Entomology seems to imply that introduction of Centipedes into the alimentary passages might occur from either end, “probably during sleep.”

Update:  February 17, 2013
Oh my goodness Daniel :-/
To think that thing crawled up her nose inside of her. How terribly sad. I guess on the bright side (if you can call it that), its better than worms in her body. The hospital lab still does not have the pathology report! I spoke to them on Friday and they are just at a loss for what to say or do. They asked me to call back and check with them next week. As soon as that report comes back, I’ll be more than happy to share the findings with you.
I truly appreciate you taking the time to look further into this for me, and for communicating with me on such an odd occurrence.
Have a great Sunday!
Carolina

You are most welcome Carolina

Centipede in her panties is Desert Tiger Centipede

Soil Centipede found in Bath Water: How did it get there???
Tagged with → Worst Bug Stories Ever!!!
Location: Florida

36 Responses to Can Centipedes really Crawl up your Butt???