Subject: clearwing moth
Location: Mountain Pine Ridge, Belize, Central America
January 15, 2013 4:52 pm
I photographed this clearwing moth at 1000 foot falls overlook on December 27, 2012. Our guide was sure it was a wasp and wouldn’t come close. Everyone in our party agreed it was lepidoptera with the antenna and proboscis. I have been told it is probably iin the trichura family. Thank you for any help
Signature: Karen Saxton 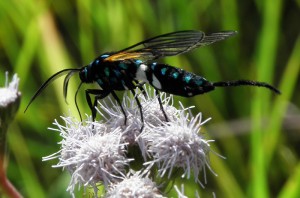 Hi Karen,
You are correct.  This is a moth, and we suspect it is in the family Sesiidae, the Clearwing Wasp Moths, but we would not totally rule out that it might be one of the wasp mimics in the Arctiinae, more specifically the Ctenuchina.  That pseudo-stinger is quite the mimicry adaptation.  It looks very similar to the mounted specimen of Isanthrene azia (?) that is on the Moths of Belize website, but that individual is lacking the pseudo-stinger.  We will contact Arctiid expert Julian Donahue to get his opinion. 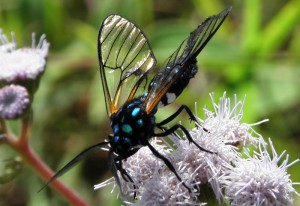 Julian Donahue responds
Ctenuchid for sure. Members of the genus Trichura appear to mimic Pepsis tarantula wasps, with that posterior appendage that looks like the trailing legs of a wasp. About 15 species are currently placed in Trichura, some without the terminal appendage (but maybe described from specimens that had lost it?), but this one is most likely T. cerberus (which is supposed to have a wider forewing discal bar than shows in the photo) or T. druryi, originally described as lacking the caudal appendage, both of which occur in Central America. As in most ctenuchid genera, this genus has not been subject to a modern taxonomic revision.
Curiously, the sesiid genus Alcathoe has a similar caudal appendage, and also mimics Pepsis wasps.
Julian