Subject: A Moth
Location: A older fish tank, inside of a house
January 10, 2013 8:47 pm
Hi I had found a Caterpillar and today it came out of it’s cocoon and I wanted to know first off should I keep it or let it go (what is best for it?) second if I keep it than what do I feed it and last but not least is it okay to keep it in a older fish tank with a top that has holes for breathing but not large enough to get out of! In that tank there is a water bottle cap full of water (in case it get thirsty lol)3 healthy leaves and a stick so that when it was a caterpillar it could make it’s cocoon on it ( it made it’s cocoon on the floor) and currently that is all that is in there should I put anything else in there!! Oh ya I also wanted to know how long is a moth’s adult life span? Thank you very much!!!!
Signature: From a Moth Owner 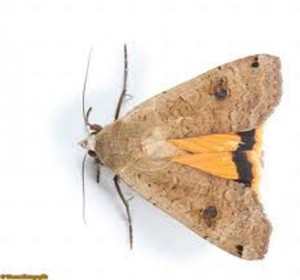 Dear Moth Owner,
While it is great to know that the location is a fish tank, a global location might be more appropriate for us to tag this submission.  If you are in Europe, this is a native species, but if you are in North America or some other location, this is an Invasive Exotic species.  We are going to assume you are not in Europe for tagging purposes.  This is a Large Yellow Underwing, Noctua pronuba, and according to BugGuide it was:  “Introduced from Europe to Nova Scotia in 1979, this species has since spread north to the Arctic Ocean, west to the Pacific, and south to the Gulf of Mexico.”  Adult moths feed on nectar and other fluids, and we do not know the preferred food of the adult moth, but BugGuide states:  “Larvae feed on a variety of crops and vegetables, plus grasses.”

Well as for the location we are in North America, so currently I have a older cutie (mini orange) in the tank, by the way the tank is NOT full of water lol. So do you think it is best for the moth to stay of be released? How long is an adult moth’s lifespan and should I add anything else to the tank other than the food, water, leaves, and that stick that I am going to remove? I also wanted to know if it is normal for a moth to sleep upside down because it keeps staying at the very top sleeping upside down!!!

We personally don’t think it is a good idea to release an invasive exotic species into the environment, though this species is already so established, we doubt it will make much of a difference.  Moths feed on nectar and other fluids, sometimes from fruit and sap, and we have no knowledge of the particular requirements of the Large Yellow Underwing.  Sleeping upsidedown from the top of the aquarium does not seem out of the ordinary.