On November 28, 2012 · Category: Uncategorized Tagged With: bug of the month · Add Comment

Ed. Note:  November 30, 2012
If you are lucky enough to live in a warmer climate in North America, you may find Monarch Butterflies or Caterpillars in December.  Monarchs are most likely flying in South America and Central America right now.  This migratory species is one of the most loved of all butterflies and we hope you enjoy these marvelous images of very young Monarch Caterpillars from Hawthorne California that our loyal reader Anna has supplied for us.  Read more about Monarchs on the Nature Works website.  You might also think about planting milkweed in your garden to help support populations of Monarch Butterflies.

Subject: Daniel – Monarch Butterfly Caterpillars
Location: Hawthorne, California
November 26, 2012 4:16 pm
Hi,
Just wanted to update you on the Monarch caterpillars in the back. They’re on to solid food now and it’s much easier to find/photograph them. Hopefully our warm weather holds, as I counted eight this morning in just a few minutes!
Signature: Thanks, Anna Carreon 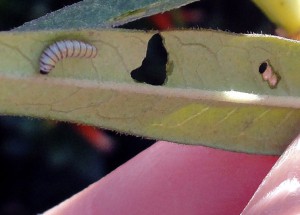 Hi Anna,
What did they eat before the “solid food” which we suspect means the leaves of the Mexican milkweed you grow in your garden.  What do they eat after the egg shell.  In Elyria Canyon Park they seem to eat the flowers first and then move to the leaves of Indian Milkweed.  We love your continuing saga on Monarchs.  Have these Monarch hatchlings molted yet, meaning are they first or second instar? 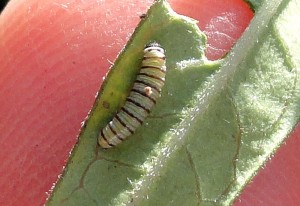 Updates
Hi Daniel,
They were piercing the seed pods (rather than eating them from the top down as they did last year when they were older), so I can only think that they must have been drinking liquid from the pod(?)  They did eat their egg shells.  I don’t notice them eating the flowers, though.  They went straight from the Mexican milkweed pods to the leaves themselves.  I haven’t yet noticed any molting, but will check later this morning.
Anna

November 28, 2012
Daniel,
I did notice today that they are sprouting antennae.  Hope this is helpful.
Anna 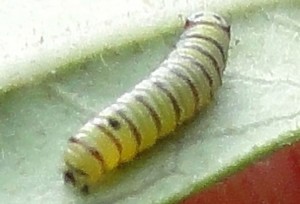 Thanks for all the additional information Anna.  We are continuing to update your posting.

Update:  November 29, 2012
Hi Daniel,
It’s a bit wet out this morning, so I did not get a chance to spend as much time out back as in previous days.  Today’s count is four, yesterday’s was 12.  I’ve been watching some videos of Monarch caterpillars molting at You Tube and also some time reading a bit about the different instars.  I think the caterpillars in the photo attached are second instar.  I’m no expert, and it is wet out there, but I think the one on the left may have just molted.  Their antennae are definitely longer today than yesterday when they were just little horns.  Waste not, want not, I’ve read that they eat their old skin.  I’ll check a little later on to see if that bit of junk just below the caterpillar on the left is gone.
Anna 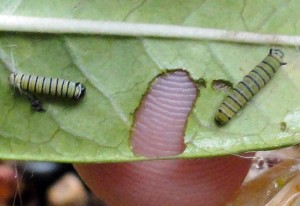 Thanks Anna,
It is time to make this posting a feature.

Update:  November 30, 2012
Hi Daniel,
Here are today’s photos.  It is wonderful that we finally have some measurable rain, but, as a result, the little guys are hiding out further into the milkweed where I can’t find them.  Only counted five this morning.  Thanks very much for the honoring them with your “Bug of the Month” designation for December 2012!
I haven’t found any concrete evidence of their molting, but will keep looking!
Anna 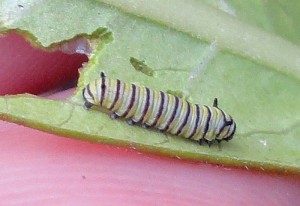 Bug of the Month December 2011: How to Raise Muskmares

Bug of the Month June 2016: Velvet Ant
Tagged with → bug of the month
Location: California