Location:  Mount Washington, Los Angeles, CA
July 21, 2012
As a prelude to National Moth Week, the Mount Washington Homeowners Alliance partnered with What’s That Bug? by hosting a Moth Night in Elyria Canyon Park on the weekend before the official start of National Moth Week in order to accommodate the busy schedules of hosts Julian Donahue and Daniel Marlos.  Since National Moth Week is about moths and diversity, we took this opportunity to educate those in attendance about the wealth of nocturnal life in Elyria Canyon Park.  Julian, Kathy, Lauri and Daniel arrived just before 7 PM and opened the gate so that visitors could take advantage of the event by driving into an area that is normally closed to motor vehicles.  Setting up for the event involved getting power to three distinct sites for attracting moths with different light sources:  black or ultraviolet bulbs, incandescent bulbs and mercury vapor bulbs, and these preparations were made before sunset. 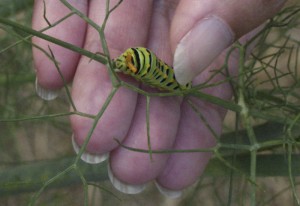 Just as Julian finished setting up the black light he was running off his vehicle battery, the first guest walked up.  Darlene from Torrance had arrived before us and while checking out the life in the park, she discovered the Caterpillar of an Anise Swallowtail as well as three eggs on the wild fennel.  Darlene, an avid fan of insects, continued to capture creatures in her viewing box and her most notable finds of the day and night included a Flower Fly larva, a female Bush Katydid, a mating pair of invasive exotic African Painted Bugs, a Checkered Beetle and a winged male Sand Cockroach.  Young Julian captured a specimen of Arboreal Click Beetle with unusual feathered antennae. 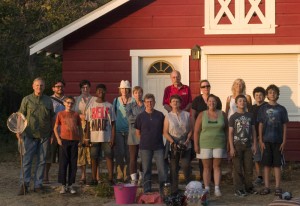 The earliest folks to arrive got a quick tour of the beginnings of the butterfly garden that the beautification committee is planting thanks to a generous grant from the North American Butterfly Association (NABA).  Gathering folks together for a group photo is kind of like trying to herd cats, but we did manage to get a few organized group shots of most of the people who arrived just before sunset.  Julian began by giving an overview of moths, their place in the ecosystem, how to attract them and then took questions from the eager crowd.  People continued to explore the park on their own while there was still light and the youngsters started catching insects in the bottles that were provided so that they could be identified.  Refreshments were provided by MWHA Hospitality VP Susanne Brody. 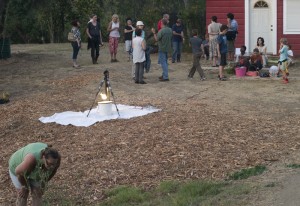 Folks begin to hunt for insects and other small creatures

A skunk wandered from the nursery behind the red barn into the meadow just as darkness began to fall and this generated quite a bit of excitement.  Then the moths and other insects began to arrive to the various light sources that were designed to attract them. 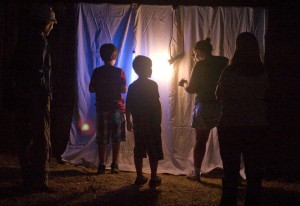 Julian explained earlier that the best nights for mothing with lights are warm, humid, calm and moonless.  Alas, the only desirable condition we had was the fact that there was a new moon.  A slight breeze and cooler conditions prevailed, but we were still graced with a variety of geometrids, pyralids, noctuids, tortricids, acrolophids, and tineids as well as some interesting beetles, mayflies and lacewings.  Fun was had by all of the approximately 35 people who attended Moth Night in Elyria Canyon Park. 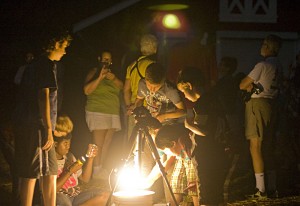 Collecting around the mercury vapor bulb