Subject: Eastern Hercules Beetle story
June 23, 2012 2:52 pm
Hi!
My coworker found a female eastern hercules beetle at our nursery in Winston-Salem, NC, which we identified thanks to your site.  I brought her home for my 9-year-old entomologist to see.  He named her Terra for the Roman goddess of the earth, and let her crawl all over him before releasing her in the backyard.
Just wanted to share & say thanks.  We love whatsthatbug.com!
Warmly,
Alison
Signature: Alison Wright 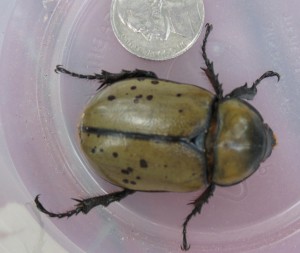 Female Hercules Beetle from our archives

Dear Alison,
Thank you for your heartwarming email.  We are generally reluctant to post letters without photos, so we found an image from our archive of a female Eastern Hercules Beetle to accompany your posting.