Location:  Laos
March 1, 2012
Another of Carol’s butterflies is a member of the family Pieridae, the Whites and Sulfurs, and we quickly identified it on Sambui Butterflies as a Chocolate Albatross, Appias lyncida vasava.  This individual is also mud puddling.  Sambui Butterflies lists the range as:  “Sri Lanka, India and Burma through the Malay Peninsular. Other subspecies throughout the Oriental Region)” and we are still waiting for information from Carol on the location of this sighting.  According to the Butterflies of Malaysia website:  “Males congregate, sometimes in groups of 50 or more, to imbibe mineralised moisture from damp patches of ground in full sunlight. They are strongly attracted to urine soaked soil, and to mineral-rich sand on recently exposed river beaches in heavily forested areas. If disturbed they fly up in a swirling mass, but resettle to resume feeding at the same spot within a few minutes. Females are normally only seen when flying in search of egg-laying sites within the forest.” 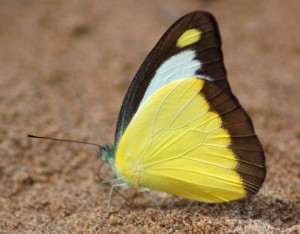 Hi Daniel,
Thanks for identifying the butterfly!
The River Ou in Laos was where the riverside photos were taken.  We were between Muang La and Luang Prabang.
The caterpillar suspended across a very large open space was probably on a low mountain near a temple near Muang La, Laos.
The other photos were near the Queen’s Garden in a mountainous area near Chiang Rai or Chiang Saen in Thailand.
Where is the butterfly site you are hosting?
Carol