Bug found in Canada
Location: Algonquin Park Canada
February 22, 2012 8:00 pm
Hi
We took these pictures of an insect in Algonquin National Park in Canada during mid August last year and have been wondering what it is and if it’s giving birth or something.
Please help
Signature: Chris and Maren 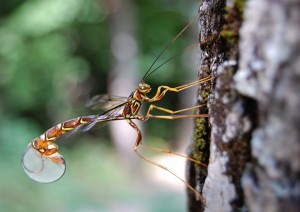