Ed. Note:  April 21, 2013
While we believe much of the information here is correct, we believe the family to be Hepialidae, not Cossidae.  Check Csiro for verification.

Canberra moth
Location: Bruce, Canberra
January 28, 2012 7:13 pm
Last night we found a massive moth on our porch, it was about 10cm in length and weighed about 45 grams. We were worried that our cats might think it would make a nice snack so decided to move it. It jumped onto my hand and was heavy and warm. We put it in a tree. We were worried it might not survive the move…..this morning we got up to check on the moth….and it had met up with another moth
Signature: Mel

Dear Mel,
We are pretty certain that you had an encounter with a Ghost Moth in the family Cossidae, possibly Endoxyla leucomochla which is pictured on the Butterfly House website.  The caterpillar is a wood borer that is called a Witchetty Grub, though alternate spellings include:  “Witjuti, Witchedy, Wichetty, Witchety, witchjetti”.  According to Butterfly House:  “The adult is a large finely mottled grey moth, with wings suffused with rusty red towards the bases, and with a wingspan of about 16 cms. It has degenerate mouthparts, and so cannot feed. It relies for energy totally on the nourishment taken in by the Caterpillar earlier in its life.”  We would not discount that it might be some other member of the genus as they all look quite similar.  There are many possibilities pictured on Butterfly House.

According to the Brisbane Insect website, Ghost Moths are also called Wood Moths and:  “Moths in the family Cossidae are from large to very large size. They have long and narrow wings like those of Hawk moths. They are mostly brown or grey in colours. Most have the inverted “U” shape on thorax. When rest, they held their wings roof-wise. The adult moths in this family do not feed so their mouth parts are largely reduced.”  While he was researching his book, The Curious World of Bugs, Daniel learned that an Australian Ghost Moth has the record number of eggs laid for a non-social insect, 29,100.

Thank you so much for your speedy reply – I got a little bit addicted to your website today.  I actually think it is a Wattle Goat Moth (Endoxyla affinis) – I have some even better photos now (they spent alot of time mating in our garden and it was easier to get good pics in the arvo) – anyway, let me know if you want me to send them through. What an amazing pair they were.

Hi again Mel,
The Wattle Goat Moth, Endoxyla affinis, did occur to us as another possibility.  We would love to post one or two better images. 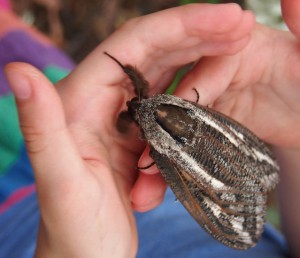 Here a some photos of both the male and female moth…..I think the female was the bigger one and had a very active scent gland which I took a photo of, the male had some blue on his head. Big storm last night and both moths have gone now 🙁 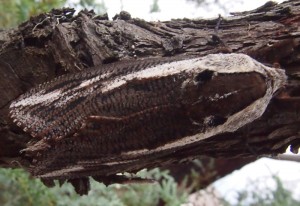 Thanks for sending additional photos Mel.  We hope they will contribute to a positive species identification.  The close-up photo appears to be a sexual organ. 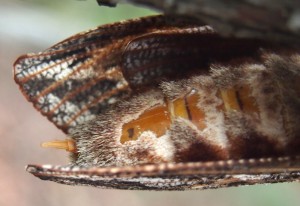 detail of a Ghost Moth

The newest image you sent of the mating pair is also a nice addition. 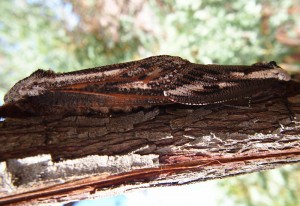